A new poll by Bloomberg Politics and The Des Moines Register shows Republican presidential candidate Ted Cruz vaulting to the front of the pack, overtaking Ben Carson and Donald Trump.

The junior senator from Texas boasts support from 31% of those who plan to attend the Republican caucuses, which kick off the official race for the nomination in February. Trump is 10 points behind at 21%. 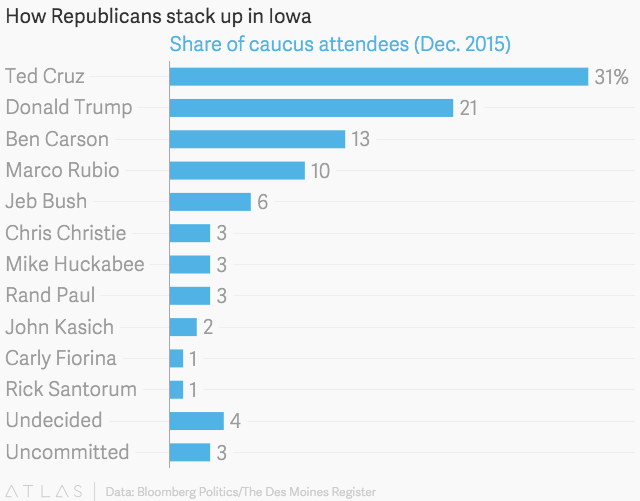 The new poll shows a 21% jump for Cruz since October, which is “the largest surge between Iowa polls recorded in at least the last five presidential caucus campaigns,” according to Bloomberg’s John McCormick. “Big shakeup,” added J. Ann Seltzer, a pollster in Iowa. “This is a sudden move into a commanding position for Cruz.”

The shakeup comes as Cruz and Trump, who had previously vowed to avoid attacking each other, have become increasingly combative. The truce first frayed last week, when leaked audio from a private fundraiser showed Cruz questioning whether Trump has the “judgment” to be president.

In an escalating game of tit-for-tat, Trump took to the airwaves over the weekend, saying, Cruz doesn’t have “the right temperament” to lead the country. “You look at the way he’s dealt with the Senate, where goes in there like a, you know, frankly like a little bit of a maniac,” Trump said on Fox News. “You’re never going to get things done that way.”

It has become a truism of the GOP presidential race that the crazier Donald Trump’s campaign has become, the saner his opponents appear by comparison. But  Trump’s playbook clearly suggests that he thinks he can position himself as “less maniacal” than whoever dares to overtake him in the polls—whether it’s Ben Carson or Ted Cruz.

Cruz, in turn, responded with this: