The report, conducted by PwC on behalf of Swiss bank UBS, analyzed 19 years of data covering more than 1,300 billionaires in economies that account for 75% of the world’s billionaire wealth, including the US, UK, France, Germany, Italy, Spain, Switzerland, Russia, Turkey, China, India, Japan, and Singapore.

The findings show that Asian women aren’t the only ones making names for themselves—in 2014, 66% of the world’s billionaires were self-made, compared with 43% in 1995. The bulk of these new billionaires—47%—are based in the US, while Asia accounted for 36% of self-made billionaire wealth and Europe made up 17%.

“While US entrepreneurs have driven a global revolution in finance and technology, Asia’s tycoons have been key participants in the region’s accelerated industrial and consumer revolutions, with the building of mega-cities and increase in real estate prices,” the report notes.

As the number of billionaires has grown, so too have their assets. The world’s billionaire wealth jumped from a combined $700 billion in 1995 to $5.4 trillion in 2014, the report showed. 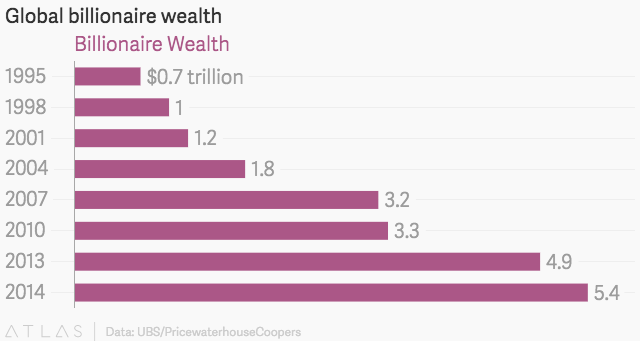