Several thousand American teenagers are likely having the best week of their lives right now. Tens of thousands more, however, might just be having their absolute worst.

Early acceptance letters are rolling out around this time from some of the US’s most selective colleges, and the numbers are—in a word—grim. It’s not that top-ranking colleges are accepting fewer students than before: They’re just getting loads more applications. And that’s pushing their acceptance rates down into single digits. You can expect to hear words like “record low” and “all-time low” being thrown around again, as they have been for the last dozen or so years now.

Because early admissions rounds take place in advance of regular admissions, they tend to see more stand-out applicants and thus higher acceptance rates. But they, too, have recently started bulging. Harvard, Stanford, and Columbia all received the largest early admissions pools in their respective histories this week—and their admit rates consequently plummeted. 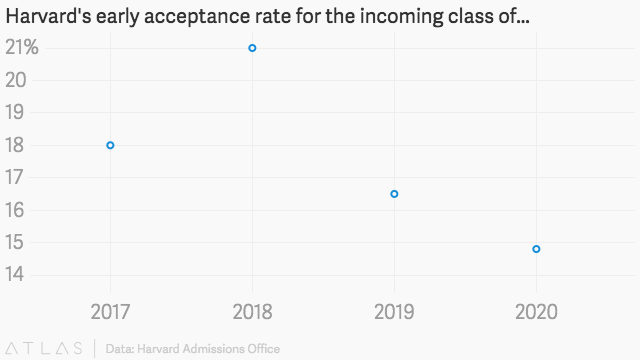 The deflated acceptance rates in this year’s early pools at elite colleges foreshadow similar results in the regular pools, in which applicants face even worse chances. (Yale, for instance, admitted 16% of applicants in its early round last year but only 4.7% in its regular round.) If regular rounds—which close in January for most schools—see the same surge in numbers as this year’s early rounds, then the US’s highest-ranking colleges may end up rejecting more than 95% of their applicants this year. 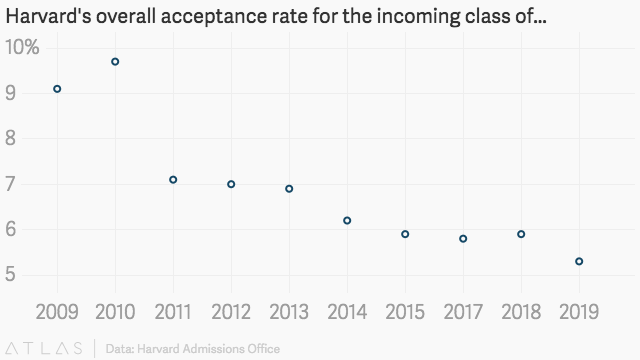 These ever-decreasing chances are, of course, unlikely to deter the most committed high school students from applying. But they might discourage or scare off many worthy students who are unsure of their abilities—such as those who come from poor backgrounds or are the first in their families to attend college. In those cases, insanely low acceptance rates have the potential to widen the already-dramatic gap between access to education and income in the US. And that’s a huge problem that admissions officers, administrators, and college counselors all over the country are struggling to address.