Slack, a business chat app launched in February 2014, already has 2 million daily users. To keep its momentum going, the company plans to invest $80 million in startups building on top of the Slack platform. 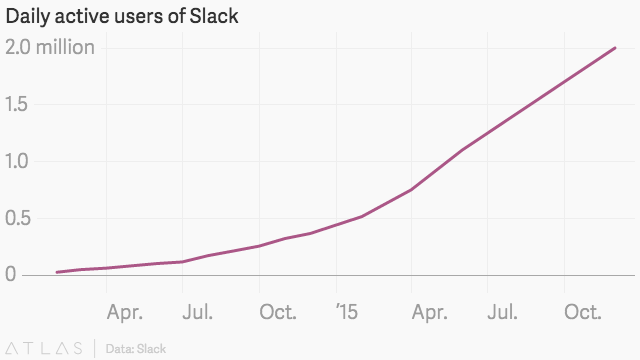 In an event in San Francisco tonight (Oct. 15), Slack revealed that it has partnered with some of its investors—Accel Partners, Andreessen Horowitz, Index Ventures, Kleiner Perkins Caufield & Byers, Spark Capital, and Social+Capital—to establish a fund that will support “Slack-first” applications and other enterprise tools centered around the messaging service.

Slack and its partners will receive equity in the startups they receive, a representative tells Quartz. The company is not disclosing how much it will contribute to the fund.

The creation of such a fund highlights how investors are bullish on Slack not just as a service, but as a full-fledged ecosystem. Of course, the Slack ecosystem is not the first to interest investors. Kleiner Perkins established a $100 million iFund (later increased to $200 million) to support developers building for iOS around the time Apple released the iPhone SDK in 2008. In 2013, Kleiner Perkins, Andreessen Horowitz, and Google Ventures created the “Glass Collective” to fund developers building apps for Google Glass.

Slack has more than 150 third-party integrations on its platform. These integrations allow users to streamline their workflows, since they can access other applications—such as cloud hosting service Dropbox or code repository GitHub—without having to leave the chat app. In addition to the fund, Slack also introduced an app directory to make it easier for users to find new integrations.

“As a business customer, you get all kinds of great [software], except nothing works together, so you get a bit of chaos,” said Slack CEO Stewart Butterfield.

The new fund has already invested in at least three companies: Small Wins, a startup currently in “stealth mode”; Howdy, which has built a bot for Slack; and Awesome, which helps automate custom workflows within Slack.

Slack, of course, is itself a startup. But it’s in a unique position to invest in other companies, having taken advantage of the favorable fundraising environment. “This is the best time to raise money ever,” Butterfield told the New York Times earlier this year.

Though the company has accelerated its hiring and spending on marketing, Butterfield said in October 2014, when it raised $160 million, that it could continue its business for another 60 years at the rate it was spending (paywall). In April, on the heels of its last round—valuing the company at $2.8 billion—Butterfield revealed that Slack hadn’t touched the money from October yet.