Things keep getting worse and worse for Brazil.

Fitch just cut the country’s credit rating to junk status, citing “the economy’s deeper recession than previously anticipated, continued adverse fiscal developments and the increased political uncertainty.” This is on top of fears that Brazil is heavily exposed to investor outflows following the US benchmark interest rate hike, due any minute now from the Federal Reserve. 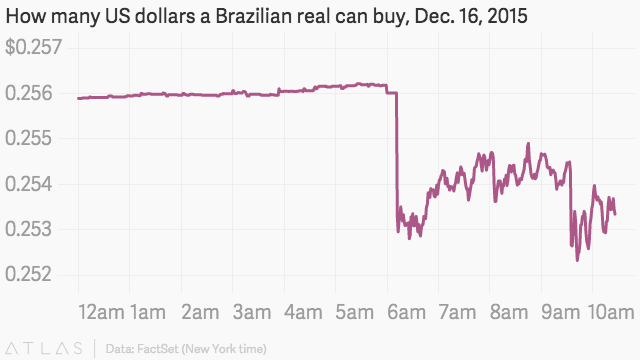 This follows a credit-rating cut by Standard & Poor’s in September. Moody’s, the the only major credit rating firm that has kept Brazil at investment-grade, placed it one notch above the junk heap on Dec. 9 and put it on watch for a downgrade.

Brazil’s rough 2015 is reflected in the real’s nearly 33% slide against this dollar this year. 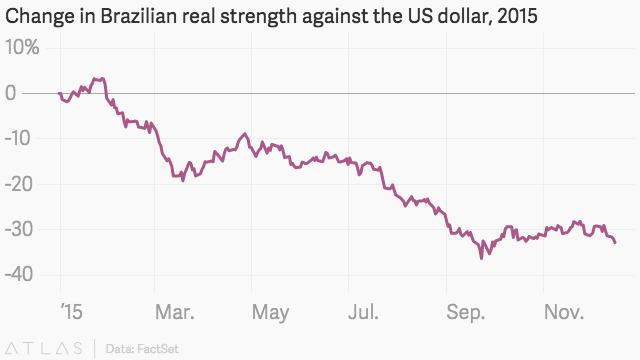 Yielding to that reality, the country’s political leadership is lowering its sights, as a Bloomberg piece recently noted:

President Dilma Rousseff’s supporters on the congressional budget committee will introduce an amendment to the 2016 spending bill that would allow the administration to aim for a surplus before interest payments of 0.5 percent of gross domestic product, said Paulo Pimenta, the government’s leader on the committee. Rousseff previously wanted to target a so-called primary surplus of 0.7 percent.

The country is the middle of a brutal recession, one that research firm Oxford Economics thinks was largely driven by a consumer credit and spending-driven consumption boom that ran out of juice (paywall) without the exports or foreign investment inflows to bail it out.

Oxford’s analysts think this means that means that Brazil has a long, tough road ahead of it before things turn around completely:

[We] think the chances of a V-shaped recovery are remote. Instead, we expect Brazil to muddle through whilst the economy rebalances in the coming years. This is a high price to pay: Brazil’s per capita income will take ten years to return to its 2013 peak.