Whether you work in a cubicle, café, or corner office.

For most workers, holiday season is a time of both reflection and uncertainty. Performance evaluations and office celebrations come hand-in-hand with questions about the future—will there be raises at the end of the year? Promotions? Bonuses?

According to several corporate surveys, not really. US employees might expect modest salary bumps in 2016, but not many end-of-year perks in the next few weeks. Quartz rounded up some of the most comprehensive predictions below.

Despite promising growth in both the job market and economy, salary increases in 2016 will be fairly stagnant, according to a November compensation planning survey from consulting firm Mercer that studied roughly 1,500 large- and mid-sized employers. An August management survey from professional services company Towers Watson found the same thing: Most companies are shifting away from fixed-pay increases, arguing that they don’t work as well as other rewards programs to incentivize workers.

The average corporation’s salary increase budget is expected to be 2.9% in 2016—not much different from the average 2.8% increase in 2015. 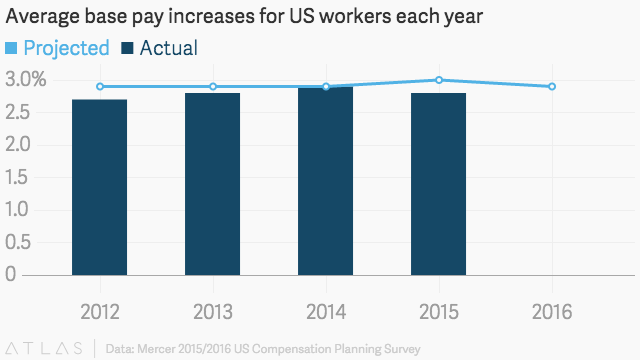 The holiday bonus is now a rarity

Say goodbye to end-of-year bonuses, as well. Financial services company Bankrate surveyed a representative sample of 1,000 US adults, and found most workers are not expecting to receive special rewards during this year’s holiday season. “The relatively low percentage of workers with a pay raise or holiday bonus reflects the still-impaired job market where there are not sustainable pay raises yet,” Oakland University economics professor Jonathan Silberman told Bankrate.

Though stingy about bonuses, companies are still willing to offer other rewards. A November survey of HR managers and hiring managers from recruitment agency Accounting Principals says most employers are showing holiday cheer one way or another, in the upcoming month—though a separate survey this month from consulting company Challenger, Gray, & Christmas notes that some are scaling down lavish holiday parties. (Take note, Yahoo?)

But there’s a silver lining…

Though companies are less willing to shower their employees with bonuses or big salary hikes nowadays, that’s not to say that workers will necessarily be less compensated by their employers in 2016.

More and more employers are moving away from across-the-board pay raise programs to in favor of short-term incentives—like performance bonuses, awards, and career-driving promotions. ”It’s no longer all about base salary,” says Sandra McLellan, an executive at Tower Watson, in a press release on her company’s recent management survey. “While our research consistently shows the importance of pay when employees decide to stay or leave an organization, we also know their decisions are not just about the money.”

McLellan adds that many employers are making “dramatic changes” to their approach to performance management, including eliminating formal ratings-based reviews and focusing on individualized bonuses. For companies, at least, these new tactics are a smart way to keep employees engaged and motivated, without spending much more.