A group of concerned citizens and NGOs including Greenpeace has urged the Hong Kong government to curb the illegal trade of endangered species, releasing a research paper (pdf) on Dec. 16. There’s strong demand from mainland China, where exotic plants and animals (or parts of them) are prized in traditional Chinese medicine.

Officials have so far refused to acknowledge that Hong Kong, a major logistics center, has become a bustling hub for the trafficking of endangered species. But numbers from the government’s own departments suggest it is—and a fast-growing one at that. Hong Kong’s environmental protection bureau and conservation department have each kept track of cases. 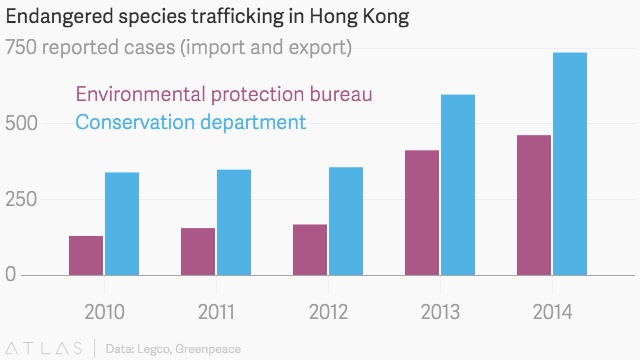 Hong Kong’s customs department can inspect only a small fraction of incoming cargo and estimates it detects just one out of 10 illegal wildlife shipments.

The environmental protection bureau tracks cases involving the illegal import or export of endangered species. (It references the list of plants and animals compiled by the Convention on International Trade in Endangered Species of Wild Fauna and Flora, or CITES.) The number of such cases jumped 350% from 2010 to the end of 2014. Measured by weight, the amount of product seized went from 3.4 to 138.4 metric tons during that time. From January till the end of September this year, cases are up nearly 400% from the same year-ago period.

Noting that Hong Kong has the world’s busiest cargo airport, the third-largest passenger airport, and the fourth-largest deep-water port, the report states:

Hotspots where wildlife trafficking is rife include the Chinese borders, particularly China’s border with Hong Kong… Utilizing Hong Kong’s free port status, the multi-billion dollar wildlife trade industry uses air and sea entry points to access the mainland. Annually, more CITES seizures are made at the international border between Hong Kong and China than at any other border in China.

As if to highlight the problem, the morning after the report went public, marine police arrested eight smugglers headed from Hong Kong to the mainland. They confiscated pangolin meat worth almost HK$1.5 million (US$193,500).

No endangered wild mammal is subject to more illegal trading than the pangolin, which has scales and other body parts that many Chinese believe to have medicinal properties. And there’s no demand shortage for other endangered animals, or parts of them, including ivory, rhino horns, and the totoaba fish. The latter’s swim bladder sells for so much it’s drawn comparisons to cocaine.