Alibaba is bringing in reinforcements in the battle against counterfeit goods on its e-commerce services.

The company announced today (Dec. 21) that it has hired the architect of Apple’s anti-counterfeiting program, Matthew Bassiur, as head of global intellectual property enforcement. Alibaba’s co-founder, Jack Ma, described the hire as an important part of a “relentless” commitment to fight against bad actors.

Knock-off products remain a problem for the Chinese e-commerce giant and its subsidiaries, enough to get it called out (pdf) by the US Trade Representative’s Office in a recent report. It’s important for the company to show it has the issue under control as it tries to appeal to buyers outside of China, which Ma has said he hopes will eventually generate half the company’s revenue. 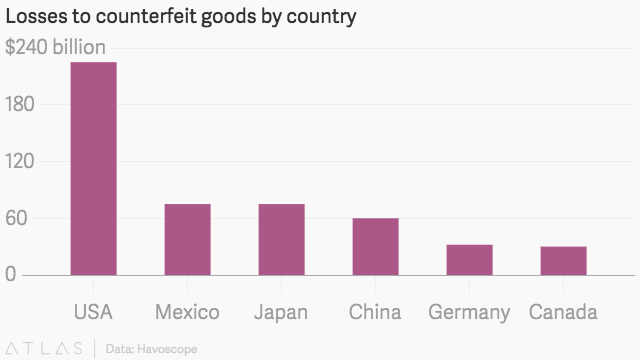 “This is more of a China problem than anything, and it’s more of an e-commerce problem overall,” said Alibaba spokesman Bob Christie, adding that Alibaba often gets singled out over its competitors, including JD.com.

Between 2013 and 2015, Alibaba spent $161 million trying to beat back against the tide of counterfeit goods. It employs about 5,400 phantom shoppers who scan the website in search of  counterfeit products.

The company worked with Chinese law enforcement agencies on over 1,000 counterfeiting cases in 2014, which led to the arrest of 400 suspects, and the closure of 200 brick-and-mortar stores, factories, and warehouses.

Alibaba and its subsidiary, Taobao, were first mentioned in a 2008 USTR special report for facilitating the sale of counterfeit and pirated goods. Since then, Alibaba has incorporated enforcement policies, including a good-faith product takedown procedure; a three-and-four strikes penalty system; and an English-language version of the TaoProtect portal to submit product removal requests.

And while those actions have helped keep Alibaba off the USTR’s so-called Notorious Markets list, they haven’t been enough to eliminate the issue.

“USTR is increasingly concerned by rights holders’ reports that Alibaba Group’s enforcement program is too slow, difficult to use, and lacks transparency,” the most recent USTR report states.

In a comment letter submitted to the USTR in October, Alibaba said the effort to protect consumers from counterfeit goods is a priority, as is developing ways to detect and combat against “ever-more-ingenious techniques for evading detection.”

Christie said Alibaba plans to use the Duberstein Group to work more closely with the USTR, and industry trade groups in its broader effort to weed out knock-offs.