There was a time in the US when home internet access meant only one thing: expensive monthly payments for broadband packages, sometimes bundled with television or phone services.

But that time has passed. Roughly 33% of Americans today do not have broadband service at home, according to an extensive Pew Research Center report released yesterday (Dec. 21). That’s an uptick from 30% two years ago, and perhaps a sign that broadband’s once-rapid growth is tapering off. Here’s why: The costs are too high, internet access is often available outside of the home, and for some, personal smartphones can provide ample online access.

Between 2013 and 2015, the number of Americans who only use their smartphones for internet access has jumped, according to the report. Increasingly accessible and powerful, smartphones can do most of the things that laptops can, in terms of online capability.

But there are certain downsides to picking smartphones over home broadband, once you break down the numbers. ”We do see particularly low-income Americans and minorities shifting away from home broadband and instead relying solely on their smartphone—but what we’ve seen in a variety of other research are the limits that internet users have, when they only have a smartphone,” John Horrigan, the senior researcher for Pew’s report, tells Quartz. 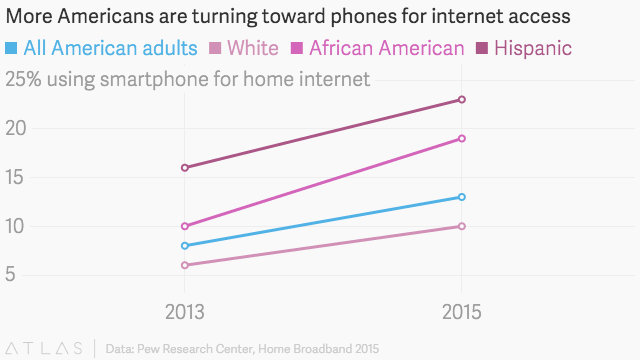 Horrigan points to three main problems with cutting the broadband cord: Most phone plans come with data caps, which limit people’s online activities every month; smartphone connections experience more online interruptions than broadband connections, causing people to cut back on internet consumption; and the smaller screens on phones make it more difficult for people to carry out activities like applying for jobs, accessing government services, and reading news and other information. As a result, poorer Americans who try to save money by cutting out broadband service may end up disadvantaged by the choice.

Of course, it’s not all bad news. The trends toward cordless homes right now pose a huge opportunity for wireless carriers, who may start to take advantage of Americans’ dwindling interest in home broadband to beef up their features and provide better offerings—which could end up helping the people who are losing out.