But today the damage was worse. On Tuesday morning, a JPMorgan analyst downgraded Chipotle’s stock to neutral from overweight, and slashed its price target to $555 from $630, citing the newest health investigation as cause for uneasiness.

“At this point, even rational and informed consumers could potentially be given reason to pause when choosing Chipotle over the plethora of fast casual competition in the marketplace,” JPMorgan’s analyst wrote in a note. And later: “We are no longer comfortable recommending the stock until food issues are 100% contained and estimates have stopped going down.”

On Tuesday, Chipotle’s stock fell another 5.3% to $494.61. It’s the first time the stock has closed below $500 since May 20, 2014. Shares of Chipotle have tumbled 23% since the end of October, when the initial spate of E. coli cases was first reported. The company warned in an SEC filing earlier this month that business had been “extremely volatile” and it foresaw sales falling 8% to 11% in the fourth quarter. 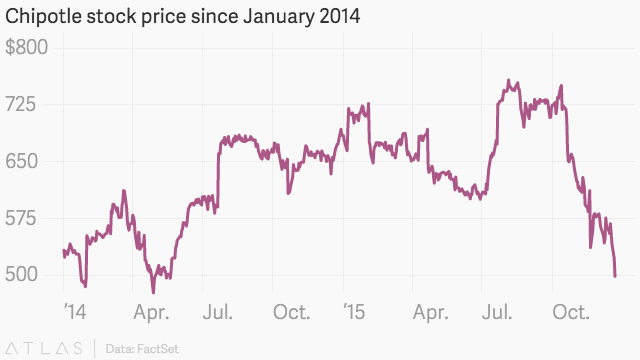 Chipotle is pouring resources into cleaning up its operations and reputation. “We have completed a comprehensive reassessment of our food safety programs with an eye to finding best practices for each of the ingredients we use,” Chipotle spokesman Chris Arnold said in a statement. “We are confident that we can achieve a level of food safety risk that is near zero.”

The problem is, investors don’t seem to share that confidence yet.