Ford has designed a vehicle that’s awesomely similar to something Batman would drive to work—if, that is, Batman worked in an office and the nearest parking lot for the Batmobile were a mile away.

According to a recently published Ford patent (pdf), first reported by PatentYogi, the American automaker has patented a car with a built-in motorized unicycle that can separate from the main vehicle, reminiscent of the way the Bat Bike emerges from the Batmobile in The Dark Knight.

The unicycle is actually just one of the car’s own wheels, which is outfitted with its own electric motor and computer system, as well as a foot pedal, seat and handlebars. It separates only when the car is parked, and unfortunately does not feature Batman-like gadgets and weaponry. But the patent says it can be integrated into almost any type of car, including a golf cart. Here’s how PatentYogi imagined it working:

The unicycle is just a flavor of the innovation going on at Ford. The company, which this year prepared to test autonomous vehicles on public roads and teamed up with Google on a fleet of new self-driving cars, says it filed a whopping 5,872 patent applications this year—36% more than in 2014. 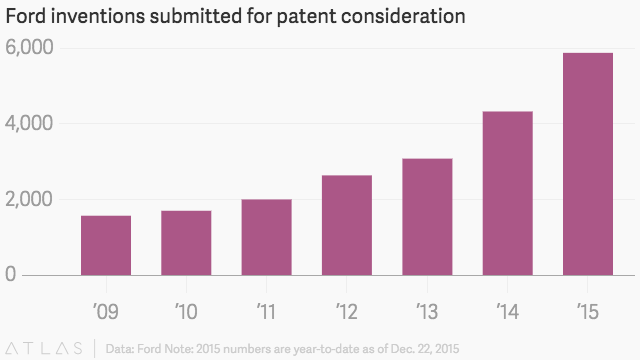 Those numbers are difficult to verify, because there is an 18-month waiting period before applications are published by the US Patent and Trademark Office. A Ford spokesperson also could not immediately tell Quartz whether the applications were submitted solely in the US or in other regions of operation

However, Sqoop, a service for news organizations that analyzes patent data, told Quartz that the US patent office published 1,114 applications for utility patents—which protect the way an invention is used and works as opposed to design patents that protect the way something looks—for Ford and its subsidiaries so far this year, and granted 1,068. By contrast, 1,259 patent applications were published for Toyota, 1,068 for Mitsubishi, 900 for Hyundai and 720 for General Motors.

Most of Ford’s applications this year centered on self-driving cars, connected vehicles, wearables, navigation systems and ride-sharing platforms. They included tools to help driverless cars spot traffic at obstructed intersections, and an electric bike system that detects obstacles on the road and guides cyclists to clearer paths, the company said.