You’re not alone if you’re having trouble finding cauliflower in US or Canadian grocery stores—or digesting the price, which has recently been observed at $7 per head or more.

A shortage due to cold weather in areas where cauliflower grows in the US—California’s Imperial Valley and near Yuma, Arizona—has caused wholesale prices to more than double since early November, according to US Department of Agriculture data. Wholesale prices passed $4 per head on Dec. 12. 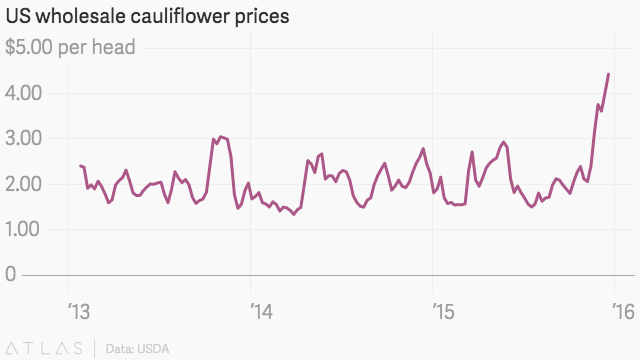 “Forget the high prices, you can’t even get cauliflower. Nobody is even quoting it,” Rick Reed of New York-based chain Price Chopper told The Produce News on Dec. 8.

Jay Van Rein, a spokesman for the California Department of Agriculture, told Quartz, “We’re getting reports of cold weather affecting not just yields, but also the timing of planting.”

The Dec. 21 edition of The Source (pdf), a newsletter from Pro Act USA, a food trade group, describes the cauliflower market thusly: “demand exceeds very light supply.” It says that “light plantings coupled with slow growth due to cold weather are insuring this shortage of supply will be an ongoing issue,” with no relief seen “well into the month of January.”

The proliferation of paleo and low-carb diets promoting the use of cauliflower hasn’t helped matters; cauliflower is now sometimes used as a rice or potato substitute or to form pizza crust.

Another industry newsletter, the Dec. 23 edition of Produce Alliance’s weekly market review (pdf), notes that the supply-and-demand balance ”is slowly improving.” The previous edition (pdf) had called the shortage an “act of God” situation, citing slow growth in Yuma crops.

But the latest update warns, despite the improvement, “We are still experiencing high prices and short supplies.”