Hope you didn’t sleep on Netflix this year.

During a year in which the S&P 500 index is barely managing to to eke out a yearly gain, the streaming company’s stock has more than doubled, up 142% (it was as much as much as 168% earlier this year, when it hit a record high). The index’s runner-up was Amazon, which is up 122% percent. 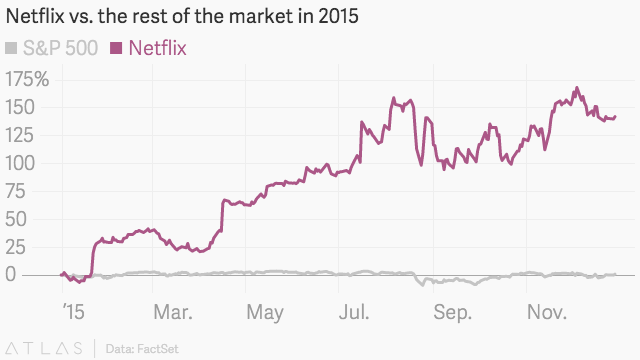 Netflix’s two new Marvel superhero series, Daredevil and Jessica Jones, were both critically applauded. It premiered seven new shows for kids, 12 comedy specials from comedians like Aziz Ansari and Chris Tucker, nine documentaries, and even two feature films—one of them, Beasts of No Nation, a legitimate Oscar contender. Its latest hit, the true-crime documentary Making a Murderer, is likely to become your newest obsession. And the company, apparently, wants to bring back all your old favorite shows.

Netflix was nominated for nine Golden Globes, beating out rival HBO for the first time ever. It garnered 34 Emmy nominations, winning four, and nabbed 10 Screen Actors Guild nominations. No longer is HBO the clear leader in prestige television.

Netflix is hoping that all this turns into greater revenue, which has climbed steadily over the years. The $1.74 billon it brought in during its latest quarter was 23% than a year prior, and it’s now had nine straight quarters of 20% or higher revenue growth. 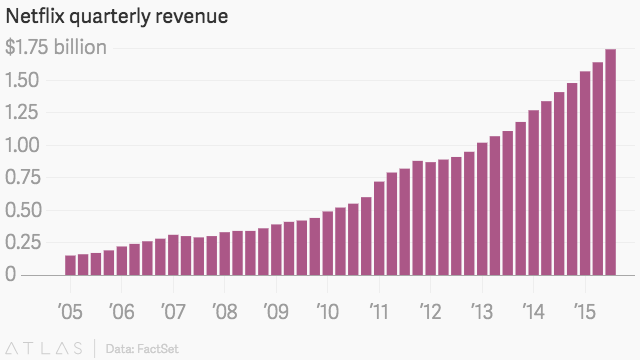 That doesn’t quite translate into huge profits—just $29 million in net income last quarter on that $1.7 billion—but the company has clearly come a long way from back in 2011, when it tried and failed to raise prices while separating its stale-but-profitable DVD business from its fresh-but-less-profitable streaming business.

In 2015, the service launched in Spain, Italy, Japan, and countless other countries, with several more on tap for 2016. More than half of Americans say they watch Netflix. It’s responsible for over a third of peak web traffic in North America. One poll alleges that 64% of Germans have seen the company’s flagship political drama, House of Cards. The company hopes to be in every country on Earth by the end of next year.