Evidence that Apple wants to combine payments and iMessage is piling up. And it looks like the tech giant doesn’t plan to stop there.

A patent filing published earlier this month (Dec. 2015) indicates that Apple is not only looking at allowing people to send money over its text messaging service, but other services built into the iOS platform, including phone calls, email, and calendar invites.

Companies like Apple file patents that go unused all the time, but the application shows that Apple is paying attention to a key trend in the technology industry: the convergence of messaging and payments.

Other major tech firms are looking to integrate payment features inside messaging apps. Facebook Messenger added the ability for users to pay their friends earlier this year, and recently added the ability to order a ride from Uber within the app. This kind of functionality is already common in Asia, where apps like WeChat—which has 650 million monthly users—let users buy food, order taxis, pay bills, check bank statements, and more.

Thus far it’s proven difficult for companies to make money through peer-to-peer payment services due to low margins. However, that may not matter to Apple. Adding payments to communication apps it already owns will be a way for the Cupertino, Calif.-based company to tap into a coveted demographic. A Sept. 2015 report from Javelin Strategy & Research, a financial services firm, found that peer-to-peer payments are especially popular with two key age groups in the US: 18-24 year olds, and 25-34 year olds. The goal will be to get these young people to use Apple Pay in stores, where Apple reportedly gets a slight cut of each transaction, and make iPhones even more integral in their daily lives. 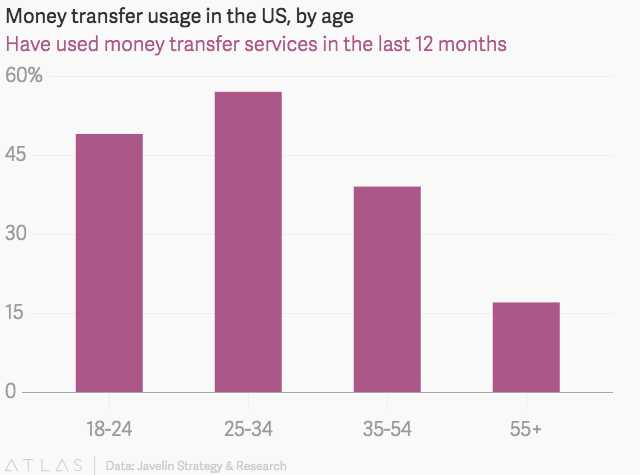 Jan Dawson of JackDaw Research first wrote about the possibility of Apple Pay and iMessage after Apple’s mobile wallet launched. He told Quartz: “With Apple, its about adding value to the ecosystem. The iPhone is maturing as a product, and [Apple] is wrapping other services into the iPhone experience.”

The patent hints at how the functionality may work. The image shows two iPhone users chatting in the iMessage app, with a payment option popping up in the top-right corner when one party asks the other to pay them back for lunch. The images also show the ability to send payments to more than one recipient, and an option to set how much money is sent.

The function could work in a number of ways, according to the description. It explicitly mentions a “phone call, text messaging conversations, an email thread, calendar events,” among other uses.