The Federal Communications Commission on Wednesday (Dec. 30) released its 2015 report on broadband internet in America. And things are good! In fact, better than you might expect.

According to the FCC, the average download speed—across all broadband internet service providers—tripled between 2011 and 2014. These speed increases have been especially consistent and substantial among cable internet providers. As you can see below, many of the big providers like Comcast and Time Warner Cable have registered steady gains in download speed since 2011. Others, such as Charter and Cablevision, have really shot up quickly. 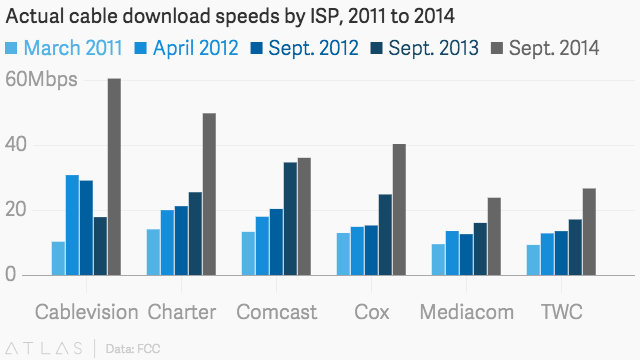 The FCC says that over the course of its reports, the average annual increase in actual download speeds has been 28.2% for DSL, 61.2% for cable, and 19.2% for fiber.

What’s more, those download speeds in most cases are equal to or above the speeds advertised by Internet service providers. In September 2014, the ratio of actual-to-advertised download speeds, averaged across all service providers, was 105.6%. That’s up from September 2013, when the ratio stood at 101.6%. The FCC notes that some DSL providers do still advertise “up-to” speeds that tend to exceed the actual speeds seen by subscribers.

While that’s all good news for US consumers, America still lags most of the world in terms of broadband speed and pricing. In 2013, the US ranked 21 out of 37 countries on average weighted prices per Mbps of consumer download speed, according to a report the FCC released earlier this year (PDF). On the other hand, the US ranks highly in terms of overall broadband coverage, which reached 80% of the country as of 2012.