By the 1980s, many had written off New York City as a hopeless enclave of crime. But along came the 1990s, Mayor Giuliani, better policing, and economic prosperity. Crime and murders fell, and Times Square became a family-friendly tourist destination. The figure below plots the number of murders over the last 20 years. Despite the continuing improvement, New Yorkers are often quick to claim the city is going downhill. The recent uptick in murders has fueled the suspicion the city is about to return to the violent hell-scape it was decades ago. 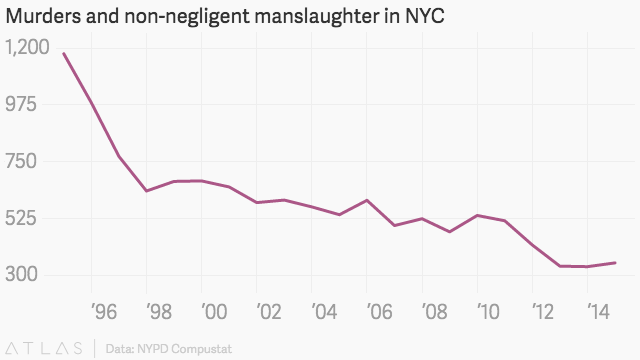 The number of murders in New York increased about 4.5% last year. The murder blip is the first increase since 2010—but little blips aren’t uncommon, and there are still far fewer murders than there were in the early 1990s. The [Mayor Bill] de Blasio administration points out there may be more murders, but overall crime is down. In 2015 there were fewer robberies, assaults, and shootings—though, presumably, people care more about murder. The disconnect between a decline in shootings and increase in gun shot murders prompted former police commissioner Ray Kelly to wonder if something isn’t adding up. Is the city getting more dangerous than the administration is letting on?

Crime statistics are notoriously opaque and faulty. Data are often manipulated for political reasons. Even the city points out the discrepancy can be explained by a change in how shootings are measured. The disconnect between shooting and murder may come down to measurement, or it could reveal something much worse: New Yorkers are getting better at murder.

According to Columbia economics professor Dan O’Flaherty, the odds of someone firing a gun and actually hitting another person is pretty low. And even if you do hit your target, there’s only a 25% chance she’ll die. Four things can increase the odds of shooting and killing someone:

A change in any of these factors could produce more gun-shot murders and fewer shots fired. It’s precisely what happened in Newark between 2000 and 2006 when gun shot murders were up (unlike the rest of the country) and shots fired went down. O’Flaherty and Rajiv Sethi studied (pdf) high murder success rates in Newark. They looked at crime and autopsies and concluded that all four factors played a role. Gang members used higher caliber and more semi-automatic weapons, they were better shots, and killed more people at close range. They attribute these changes to lax law enforcement and prison reorganization, which led to more networking among gangs and escalated gang violence. The result was that potential criminals invested (both tools and effort) in becoming better at murdering. If one gang is killing people, you need to up your game to survive. It is kill or be killed, and criminals make the extra effort resulting an arms race of more murders per shooting.

The recent increase in the murder-to shooting rate is not only possible, but also potentially worse than a simple increase in murders because it can signify a more lethal criminal force, with greater determination to kill, and more dangerous weapons. O’Flaherty says it’s too soon to tell if that’s what’s happening in New York right now. When the odds of killing anyone are so small to begin with, this past year could just be a statistical anomaly. “Killing someone comes down to luck,” he tells Quartz. The increase in murders could be due to a number of factors. “It’s small enough it could come from more traffic slowing down ambulances.”

But luck can’t explain why murders are up in other cities too. Nationwide, the number of murders increased 11% in 2015, while other forms of crime declined. The fact that a decline in crime coincided with an increase in murders nationwide could mean a more lethal criminal element is brewing. Or it could simply be that the murder rate has gotten so low that even a statistically insignificant blip appears large.

It’s worth noting that over the last several years Americans have gotten worse at murder. The figure below is the ratio of murders involving firearms to aggravated assaults (an imperfect measure of shooting) involving firearms. 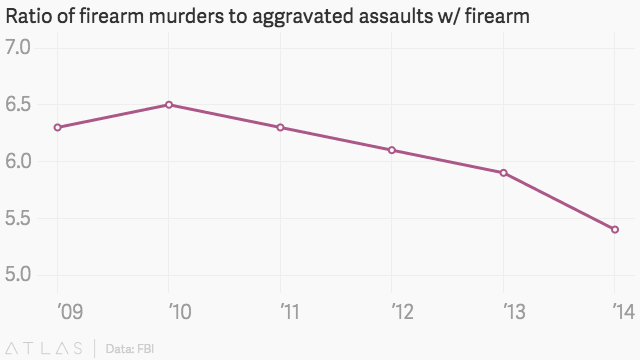 A high murder-success rate comes down to both luck and a significant time and financial investment. A high murder-to-shooting rate is worrying because it can mean would-be killers are trying harder and have more resources. It is still too soon to know if last year was an anomaly or if New Yorkers (and other Americans) are taking steps to improve their odds.