In the final weeks of 2015, shares of activewear pioneer Lululemon took a hit amid concerns that the company was overloaded with high-price inventory, in a crowded market.

But in the first days of 2016, the upmarket purveyor of stretch-pants and $100 hoodies has seen its shares rally. While everything else has been terrible, analysts are feeling sanguine about Lululemon’s outlook this year. Wells Fargo and Jefferies both upgraded their ratings on the company’s stock, and J.P. Morgan raised its price target from $55 up to $66. So what changed?

The brand knows what the problems are, say banks, and it’s working to fix them. 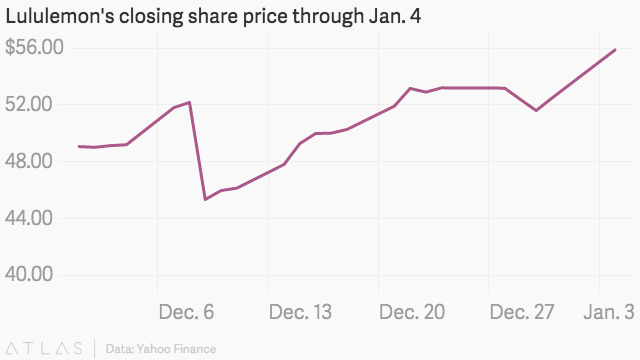 In a note to investors, Wells Fargo said changes the brand is making to its supply chain will lower costs and improve inventory management, which it had previously said described as “subpar.” In its note, Jefferies also pointed to changes in the supply chain, adding that the brand has lots of room to grow overseas—currently just 6% of its revenue comes from international sales. (One of the pressures on the company in 2015 was that it was spending heavily to expand abroad.)

There’s also potential in selling more activewear to men and kids, customers the brand hasn’t tapped nearly as fully as it has women, and a growing e-commerce business.

There was one other interesting opportunity J.P. Morgan mentioned in its note: In February, a standstill agreement Lululemon has with private equity firm Advent International is set to expire. Once that happens, the company will be free to pursue new growth opportunities.

Matthew Boss, a J.P. Morgan analyst, pointed out that Dow Chemical and DuPont announced their merger one day before a standstill agreement Dow had expired, though there’s no indication right now something similar is in the works here.

Not everyone sees Lululemon pulling off a turnaround just yet, though. As MarketWatch reported, Andrew Burns, a senior analyst at D.A. Davidson, says Lululemon “has had execution issues for a number of years,” such as the sheer yoga pants debacle and the recent June recall of face-attacking workout tops, causing him to be cautious about the company’s ability to improve margins. Lululemon, he says, does have potential, but he points to Nike and Under Armour as better ways to invest in the booming activewear market.

The company’s share price, which is just above $55 at the time of this writing, doesn’t look like it will be returning to its high of $81, which it hit in June 2013, anytime soon.

Still, there’s no denying the company has a base of fiercely loyal customers who want to see it succeed. It’s just a matter of whether Lululemon can deliver.