Brazil logged a $7 billion trade surplus in December, which the Financial Times noted is a record (paywall). In normal times that’d be a cause for celebration, as it would show robust international demand for a country’s products and send investor cash pouring in to chase it. 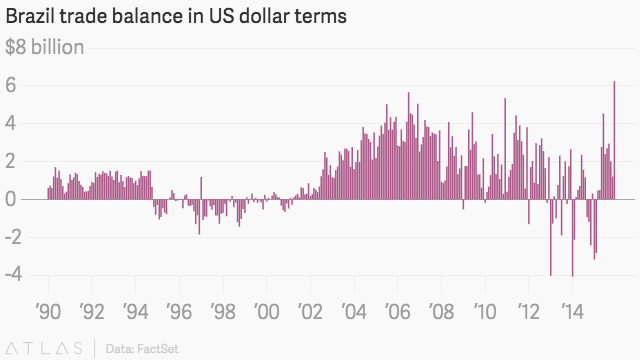 But these aren’t normal times. Brazil’s exports are slowing amid an overall slowdown in global trade, but the big reason for the sudden jump in the trade surplus is that imports are cratering as the Brazilian economy falls apart. 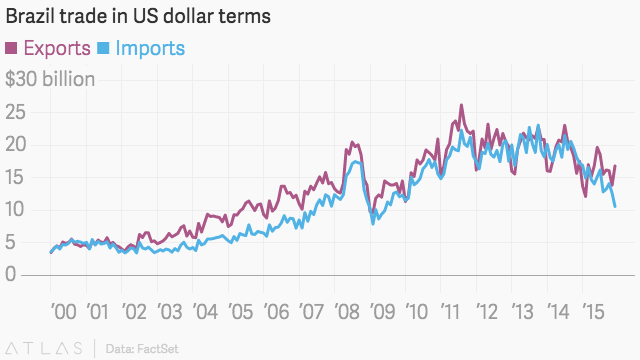 All this doom and gloom makes the impending Olympic games in Rio de Janeiro an awkward reminder of how far things have fallen since Brazil was named host back in 2009.

The Rio Olympics spokesman, Mario Andrada, recently told AFP that the Olympics are going to be “spectacular.” But there’s no way around cutbacks. The budget will be reduced by somewhere between 5% and 20%. Athletes will have to watch the games on communal TVs because there won’t be a set in their rooms. And dignitaries will be served traditional beans and rice instead of gourmet fare, according to the news agency.

Brazilian GDP is expected to have shrunk by 3.7% in 2015, according to the FT, and things aren’t expected to get better any time soon. Bloomberg noted Monday (Jan. 4) that expectations for Brazil’s economic growth seem to be falling by the day, and now forecasters within the country estimate GDP will shrink by 3% this year.