In September, the European Union agreed to relocate 160,000 migrants stuck in Greece and Italy, but progress has been painfully slow. The latest data from the crisis show that the EU has now resettled 0.17% of the refugees it pledged to welcome—just 272 asylum-seekers.

Refugees were to be redistributed based on a formula that reflected a county’s population, GDP, unemployment rate, and the average number of asylum applications it has processed in the past. (Denmark, Ireland, and the UK didn’t participate in the scheme.) Greece, Hungary, and Italy were exempted from having to relocate refugees as they were already at the frontline of the crisis. 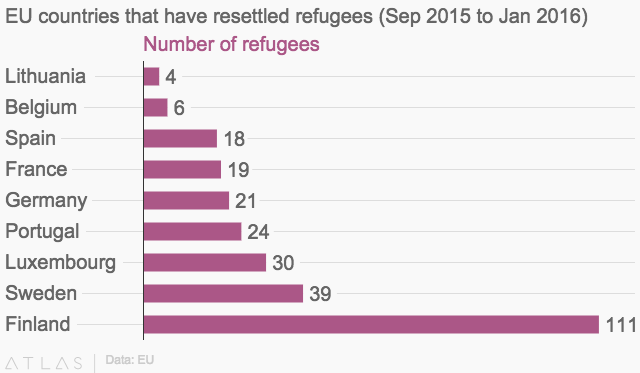 The latest data adds further evidence that the burden of the refugee crisis is not being evenly shared. Nineteen member states have yet to resettle any refugees from Italy and Greece, while only 17 member states have made 4,207 places available—out of that 160,000. Germany itself has resettled 21 refugees, though the country registered about 1.1 million asylum seekers in 2015 as it accepted unprecedented numbers of migrants.

The EU has also only provided 447 border guards provided out of a promised 775. Some of the countries most vocal about European border controls, such as the Czech Republic and Hungary, only provided eight and four guards, respectively.