Prices for Brent crude oil, the commodity’s international benchmark, just hit a new 11-year low and is trading below $35 a barrel. West Texas Intermediate, the US benchmark, is still above its financial crisis-era low, but it’s also below $35 a barrel. This is the first time both contracts have been under $35 at the same time since 2004. 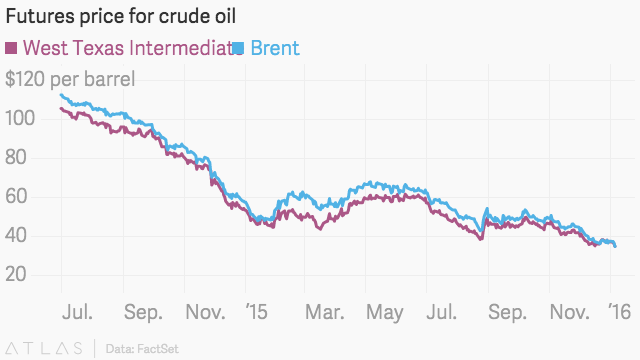 The trigger today? A soft reading of services activity in China’s economy. Since China is undergoing—or at least its government is trying to encourage—a shift from a manufacturing-driven economy to one built on consumer activity, Monday’s industrial activity numbers wrecked global markets but left oil prices more or less alone. But, as CNBC reported, financial firm Markit’s purchasing manager index for services hit 50.2, signaling that things are just barely expanding, sparking further worries.

A Bloomberg story in September noted that some analysts dispute the notion that Chinese oil demand is under threat, but oil industry newswire Platts just put out a report that suggests the growth of that demand is becoming less robust.

The growing rift between Iran and the Arab world that threatens to engulf the crucial Strait of Hormuz has led analysts to believe it’s increasingly unlikely that major exporters in the region will be able to reach an agreement to cut production, further pressuring prices. At the same time, US crude oil stockpiles are hovering near a new record. All this means $20 oil becomes less unthinkable by the day.