Mexico’s brutal war on drugs is showing up in the country’s public-health data. A study from the University of California, Los Angeles, released Jan. 5, shows that between 2005 and 2010—the height of the federal government’s efforts to eradicate drug cartels—a spike in the country’s homicide rate cut average male lifespans from 72.5 years to 72 years in two-thirds of Mexico’s states. The life expectancy (the number of years left to live) for men aged 15-50 also dropped by six months across the country as a whole.

The drop is a reversal after decades of steady gains. From 1940 to 2000, Mexican men could expect to live four to five more years with each passing decade, Hiram Beltrán-Sánchez, one of the study’s authors, tells Quartz. Had the homicide rate stayed stable, male life expectancy in 2010 should have been closer to 76 years, he says.

After president Felipe Calderón launched a military campaign against drug cartels, Mexico’s homicide rate jumped to 22 murders for every 100,000 inhabitants in 2010, from less than half that in 2005. Men bore the brunt of the spike. 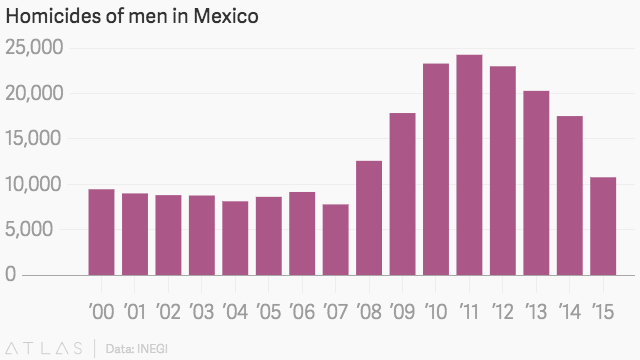 The true number of deaths is probably even larger, given that more than 25,000 (link in Spanish) people who disappeared remain unaccounted-for.

Most of the violence has been in states where the drug cartels are busiest. In Chihuahua, Sinaloa and Durango, all in northern Mexico, homicides reduced male life expectancy by three years, according to the study. Murders are more common among younger men; cancer and other illnesses become larger causes of death in later years.

Researchers were expecting to find an impact in the most affected areas and age groups, but “it was a surprise that homicide rates had such a large effect at the national level,” said Beltrán-Sánchez. The study’s authors will now take on similar research in Central America, where the murder rates are even higher than in Mexico.