As the CEO of Macy’s, Terry Lundgren has been one of the staunchest believers in the traditional department store model. But even he had to admit it was a lousy year for the chain.

After a rough 2015 capped by a grim holiday season sales performance, Lundgren said Macy’s will shutter 40 of its 770 stores by spring 2016. (A complete list can be found here.) More than 1,500 store employees are expected to lose their jobs. The company also plans to offer buyouts to 165 senior executives with the Macy’s and Bloomingdale’s chains, and will cut 600 back-office positions.

The closures and cutbacks, which will reduce overhead by about $400 million a year, are, in part, emblematic of a larger shift by consumers to the conveniences of online shopping. Macy’s filled a record 17 million online orders in November and December, a 25% increase over the same period in 2014. The company could not yet be called an e-commerce giant, though. For comparison, Amazon reported filling more than 23 million orders on Cyber Monday (Nov. 30) alone.

Lundgren told analysts in November that while retail spending remains strong, most department stores aren’t carrying (paywall) many of the items consumers are currently focused on, such as cars, electronics, and home improvement items, according to The Wall Street Journal. He said the retail industry would need to approach the holiday season creatively in order to surprise and attract consumers. But any tactics employed by Macy’s this November and December weren’t enough to stop an overall sales decline of 4.7% compared to the same period in 2014.

Macy’s stock price at the close of regular trading on Tuesday (Jan. 6) was at its lowest since July 2012. The shares are at roughly half their July high of $72.31. 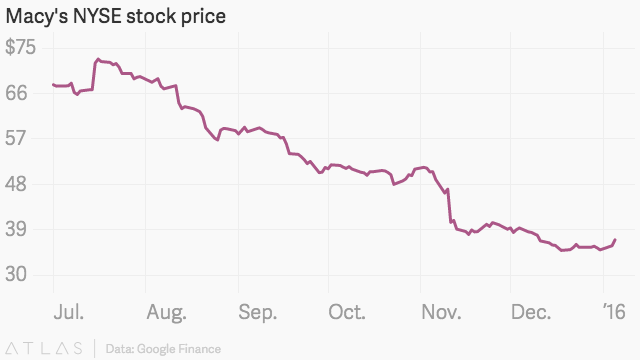