The US has made major strides bringing high-speed internet to more parts of the country, but federal regulators are concerned the efforts haven’t been aggressive enough.

In 2014, the most recent data year available, nearly 40% of Americans in rural areas still lacked access to broadband. That compares with 4% of people in urban areas, and the roughly 10% of Americans overall, numbering 34 million, who still couldn’t connect to broadband in their homes or businesses. 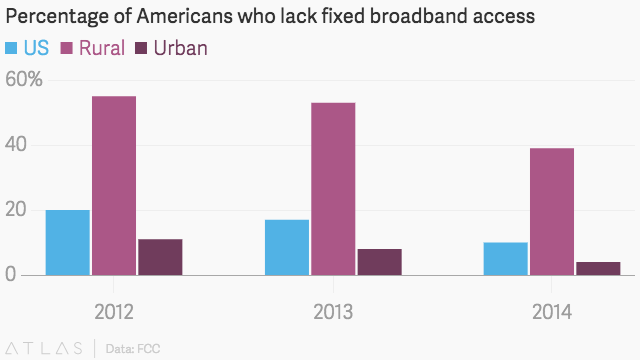 In at least one rural region, in the San Juan Islands, communities became so frustrated with their fickle service that they banded together to create their own networks.

The FCC measures broadband access each year to determine whether the US and its internet service providers are working swiftly enough to make high-speed internet access available to all Americans. If they are not, as the FCC deemed last year (pdf)—and as Wheeler suggested this year—the regulatory agency is required to “take immediate action” to speed things up.

Wheeler’s draft highlighted a number of ongoing initiatives designed to move things along, including funding to expand broadband access to 3.6 million rural homes and businesses by 2020, and a program to better support fiber and WiFi in schools and libraries. As of 2014, about 40% of schools—covering nearly half the nation’s students—had not met the FCC’s short-term goal of having at least 100 Mbps speeds for every 1,000 students and staff members. Less than 10% of US schools have connections capable of the FCC’s long-term goal of 1 Gbps per 1,000 students.

The working broadband progress report will be discussed at an open meeting on Jan. 28 before the FCC makes its final assessment.