Last August, Wired writer Charley Locke stated that “Podcasts’ Biggest Problem Isn’t Discovery, It’s Diversity.” In her article, Locke argued that the podcasting hasn’t reached broader audiences because it’s been inhabited by white males, who mostly circulate their content among other white males. That argument has been on my mind since reading her piece — not that it isn’t valid, but to what extent might podcasting be dominated by this one group.

To answer this question, I randomly selected 1,470 podcasts from iTunes US, which supports the world’s largest podcast directory. I searched for photos of the podcast’s hosts and was able to find this for 800 podcasts. After locating the photos and other info, I recorded the hosts’ primary race-ethnicity, gender, and months the podcasts were active. I also reduced the sample to only podcasts with hosts based in the United States, which resulted in a total of 537 podcasts. The data is available here.

I found that 85% of American podcasts I sampled had at least one white host. As shown in the chart below, two-thirds (66%) had a white male host. Altogether, 18% of podcasts had a non-white host. 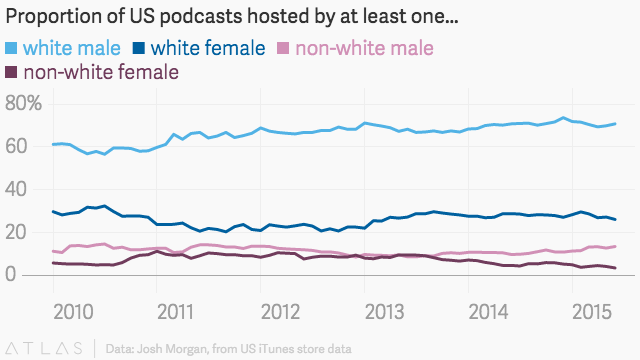 To put these results in another context, I overlaid the averages with the cumulative total for all American podcasts over time, which I calculated elsewhere. See below.

At some level, these figures may not seem so problematic. For one thing, the proportion of non-white podcasters bears similarities to other forms of media. According to data reported by the Pew Research Center, non-whites in the US represented about 13% of newspaper and radio employees in 2013, and about 22% of local television employees. The 18% of podcasts with at least one non-white host (note: that’s not the same as the number of non-white podcasters, but let’s use it as an approximation) falls somewhere between the two.

For another thing, the non-white population of the US is only 23%. So at first glance, podcasting doesn’t seem all that skewed.

But there may be another consideration to keep in mind, which is audience. As Locke pointed out in Wired, of eight of the top ten podcasts in the US, all but two were hosted by a white man at the time. So white-male-hosted podcasts probably have a disproportionately large share of the listeners. And, as she goes on to say, advertisers will be drawn to podcasts that have a wealthier demographic, which is more likely to be white, which in turn encourages the creation of more podcasts aimed at that audience.