Get ready to spend even more of Super Bowl Sunday watching commercials.

The past six Super Bowls were the most ad-saturated in history, with more than 47 minutes of commercial time each, according to research firm Kantar Media. And the trend is expected to continue in 2016. 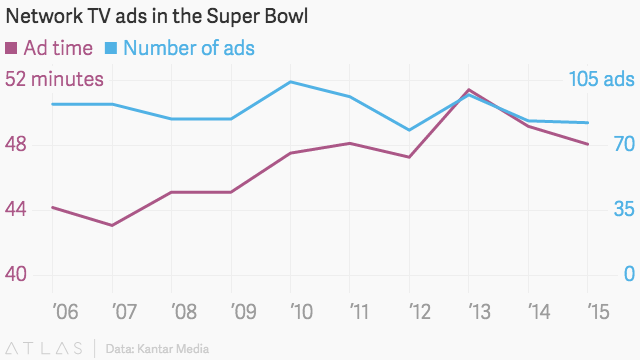 Last year’s big game had more than 48 minutes of advertising time—including paid sponsors, commercial messages from the NFL, and advertisements from the network for its own programming—up from 44 minutes in 2006, Kantar found. (Note: The spike in the 2013 game, dubbed “Blackout Bowl,” was in part because CBS re-ran the spots that had aired as the game was being interrupted by a stadium power outage.)

Super Bowl ad time is also much more expensive now than it was a decade ago. The average rate for a 30-second ad skyrocketed by more than 75% over the last 10 years, reaching $4.4 million in 2015. This year, a 30-second spot in Super Bowl 50 reportedly costs about $5 million. 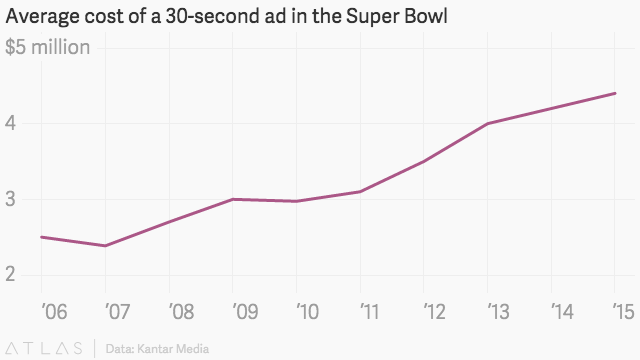 Super Bowl 50’s ad time is almost completely sold out at this point, although the network CBS told Ad Age last month that it was still holding a few time slots.

The Super Bowl is one of the few times a year that average Americans actually look forward to advertising, which is part of why brands are willing to funnel more and more dollars to the game and its 100 million viewers. About a quarter of Americans who watch the Super Bowl say the commercials are the most important part of the broadcast, according to a 2015 NRF survey, and 77% said they look to the ads for entertainment.