The question of where China’s currency is headed has transfixed investors for months, including since the start of 2016, when it’s been swinging sharply. The answer has global repercussions, yet the decision processes behind Beijing’s tight control of the yuan remain opaque.

At a briefing at the Chinese consulate in New York yesterday (Jan. 11), at least one thing was made clear: China is determined to battle those shorting the currency. “Attempts to sell short the renminbi will not succeed,” warned Han Jun (paywall), deputy director of the office of the Central Leading Group on Financial and Economic Affairs. “The expectations of markets can be changed.” What’s more, wagers that the yuan will slump 10% or more against the dollar are “ridiculous and impossible,” he said. 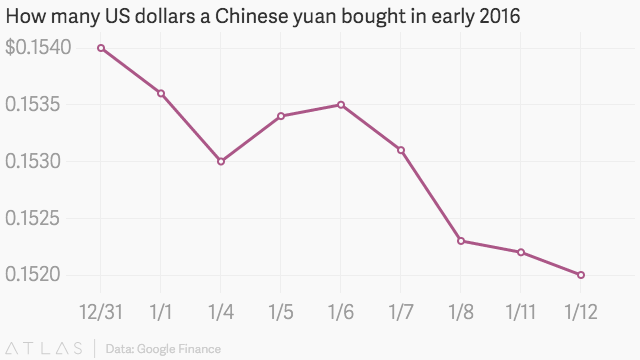 Currency trading in Hong Kong on Tuesday (Jan. 12) showed Beijing means business. The People’s Bank of China repeatedly intervened by buying up yuan in the offshore market to put off bearish speculators, sparking a surge in the city’s money-market rates, according to Bloomberg.

Little seems impossible when it comes to China’s currency—which is part of the problem. In August Beijing surprised investors by abruptly devaluing the yuan to arrest the nation’s slowing economic growth. Short sellers have been circling the yuan as fears about the real strength of the Chinese economy increase, adding to speculation that China could devalue it again in coming weeks or months to boost exports.

And the sharp swings in the currency seen so far this year suggest that authorities have changed the way (paywall) they set the yuan’s rate, which it does each morning at 9:15am.

But again, how the new method works is no clearer to outsiders, who are left with a guessing game. That hardly instills confidence among investors. It also raises questions (paywall) about how far Beijing—which has shown a heavy hand trying to control markets—is willing to move in the direction of market liberalization.