On Harvard’s undergraduate admissions website, there is a line that pledges: ”Bringing promising students to Harvard is our main objective, and we believe your financial circumstances should never stand in the way.”

The same sentiment is echoed by other selective US colleges—Yale claims to seek out “brilliant minds from every conceivable background,” Dartmouth touts its “rich and evolving history as a diverse community,” and so on.

Yet despite the rhetoric and a slew of diversity initiatives in the last few years, elite US college campuses on the whole are still deeply divided by wealth, according to a Jan. 11 report (pdf) from the Jack Kent Cooke Foundation, a scholarship organization.

Through an analysis of federal data, the report found that while the number of freshmen college students receiving Pell grants (federal financial aid awards) has increased overall in recent years under the Obama administration, that number has not risen proportionally at selective colleges. It also found that roughly two-thirds of students at the country’s most selective institutions—defined as the top 91 colleges in Barron’s 2015 rankings—come from the US’s top 25% wealthiest families. Meanwhile, a measly 3% of students are from the US’s bottom economic quartile. 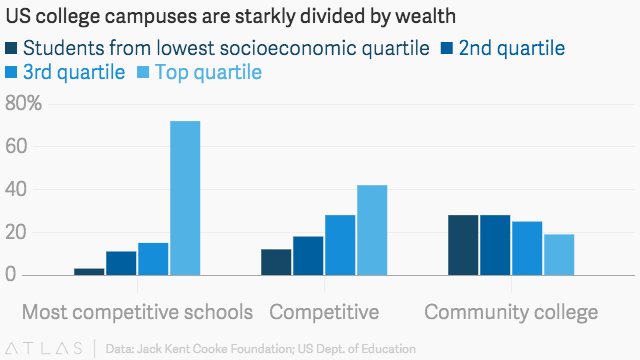 Less competitive schools, like community colleges, see a relatively even distribution of wealth among students—but the most competitive colleges show obvious disparities. “The underrepresentation of lower-income students at highly selective colleges has not changed significantly in the past 10 years,” the foundation wrote.

There are several factors at play. First, wealthy students tend to have better educational resources (think prep schools, tutoring programs, expensive parent-funded summer trips), leading them to be better prepared for college than students from low-income backgrounds. They perform better on tests, receive extra help on applications, and are pushed by their families to aim high. Poorer students receive less exposure to elite schools as well.

It can also be blamed on a failure, on elite colleges’ part, to make themselves accessible. At the country’s most selective institutions, cultures of exclusivity and impenetrability are pervasive. That, coupled with most students’ lack of understanding about financial aid packages, makes for a self-fulfilling prophecy: Low-income students believe the US’s best schools are only available to the rich, and so only the rich apply. As long as these stereotypes go unaddressed, the jagged discrepancies in student wealth will continue.