After two embarrassing prison escapes of one of the most sought-after criminals in the world, Mexican officials seem committed to extraditing Joaquín “El Chapo” Guzmán to the US. But don’t expect the Mexican government to hand him over any time soon.

Top officials in the office of Mexico’s attorney general are saying the process will take at least a year (link in Spanish,) if not several more. “We’ve had procedures that lasted around four to six years,” José Manuel Merino Madrid, who oversees Mexico’s extraditions, told Imagen Radio’s Adela Micha.

If El Chapo’s last jailbreak is any guidance, he would be long gone by then. After the last time he was caught, in February of 2014, it took him 17 months to escape from the Penal del Altiplano, the same maximum-security prison where he’s being held now. Mexico’s attorney general’s office did not respond to an interview request. Attorney general Arely Gómez González has said her office is taking all the necessary steps to fulfill the US’s extradition order for Guzmán.

Here’s why completing the job will take a while:

Under Mexican laws, an individual subject to extradition has the right to contest it through the courts. Guzmán has already filed numerous injunctions (Spanish) to prevent his extradition, including several while he was on the run. That will no doubt stretch out the process.

Lack of political will

An extradition can be relatively straightforward, Stephen Vladeck, a law professor at American University, told Quartz. But at the end of the day, how easy or difficult it turns out to be depends on the sending country’s willingness to cooperate.

“A country that doesn’t want to cooperate can find lots of ways to get lost in the bureaucracy,” he adds. “It’s really 90% politics and maybe 10% law.”

It’s unclear how anxious Mexican president Enrique Peña Nieto is of shipping El Chapo north. Mexico’s extraditions to the US have trended down since he took office at the end of 2012. 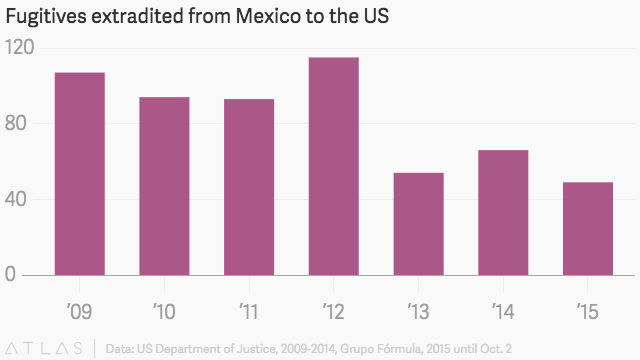 On Jan. 13, Mexico’s secretary of the interior, Miguel Ángel Osorio Chong, said during a radio interview (Spanish) that the government’s  current focus is on questioning Guzmán, not extraditing him.

“Right now what’s more important is the information that we can receive that helps us bring peace to the area where he had influence,” he told Radio Fórmula.

An absent US ambassador

Guzmán’s capture is also catching the US at a time when it doesn’t have an ambassador in Mexico to prod officials to speed things up. Florida senator Marco Rubio, who is Cuban-American, has reportedly held up the confirmation of the White House’s nominee for the post as a protest against US president Barack Obama’s opening of diplomatic relations with Cuba.

Asked earlier this week about the request for Guzmán’s extradition, US State Department spokesman John Kirby declined to comment directly on the case, referring reporters to the US Justice Department, which carries out extraditions. But he did say it would be easier to deepen cooperation with Mexico if the US had an ambassador in that country.

After a lifelong career in organized crime, including as head of one of Mexico’s most powerful cartels, Guzmán is bound to have ample inside knowledge about alleged relationships and deals between the government and drug traffickers, says John Ackerman, a law professor at National Autonomous University of Mexico, or UNAM.

“There’s not a lot of interest in having this man sharing all the information he has about the complicity between politicians and drug traffickers,” he tells Quartz. “For them, it’s more comfortable having him in Mexico and being the sole owners of that information.”

Ackerman is betting that El Chapo will escape again before he’s sent to the US.

Or… the extradition timeframe could be a ruse

Prosecutors perhaps could be saying it will take years to hand over Guzmán in order to mislead his lawyers and later catch them by surprise with a sudden extradition agreement, argues Raúl Benitez, a security expert at UNAM. And he tells Quartz there could be countless other reasons for why Mexican authorities are saying they can’t extradite Guzmán faster.

But if there’s one good reason to extradite Guzmán as quickly as possible, it’s this: A third escape is simply too big a risk for Mexico to to take.