Even after the lunch hour, it appeared that Jan. 13 would prove to be a refreshingly stable day on China’s stock markets, with no wild swings up or down. But in the final hour of trading, stocks fell abruptly.

The Shanghai index ended at 2,949.6, nearly matching the low point of the August 2015 rout—2927.3 on Aug. 25 (also a low point for the year). That rout was a response to Beijing’s sharp, sudden devaluation of the yuan a few weeks prior. 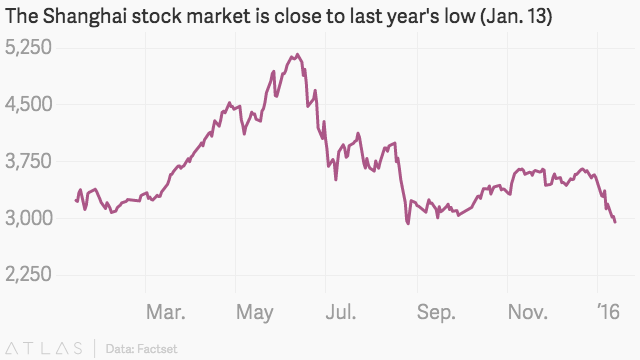 This year’s selloff began in the first week of January, spurred at first by investors’ concerns that government moves to prop up the market could end. It was then exacerbated by a poorly conceived and soon scrapped circuit breaker mechanism. In all, as much as 7.4 trillion yuan ($1.1 trillion) was wiped from China’s stock markets last week (paywall).

Yesterday (Jan. 12) the People’s Bank of China repeatedly bought up yuan in the offshore market to put off bearish speculators, sparking a surge in the city’s money-market rates, according to Bloomberg.

But such arbitrary, heavy-handed market management has done little to foster confidence among investors.