US presidential hopeful Bernie Sanders has been largely overshadowed by Democratic frontrunner Hillary Clinton and boisterous Republican candidates like Donald Trump for much of the primary election cycle. But the Vermont senator’s ads are killing it with both Democrats and Independents.

Commercials from the Sanders campaign, released over the last 180 days, dominated a list of top political ads ranked by effectiveness by ad-scoring firm Ace Metrix. The scores were based on eight metrics, including whether people enjoyed watching the ads, thought they were persuasive, agreed with the overall messages, were driven to seek more information, learned something from them, thought they were credible, found them relevant, and whether the ads grabbed their attention.

Ace Metrix scored 152 political ads released over the last six months, based on interviews with 500 national registered voters per ad. The respondent pool was evenly balanced, the company said, between those who self-identified as voting Republican, voting Democratic, and voting Independent.

Commercials produced by the Sanders campaign made up seven of the top 10 most-effective ads as determined by overall voters, because they performed well with both Democrats and Independents, the results showed.

Top 10 most effective political ads, as of Jan. 12

Most of the ads are not flashy and depict Sanders on the campaign trail, talking to voters frankly about the issues. One of the top ads, titled “Mari,” makes the case for Sanders’ fight against big pharmaceutical companies from the perspective of a real-life supporter and nurse. It’s a strategy that appears to have worked well for other candidates, including Clinton. The former secretary of state’s only ad on the overall top 10 list featured a similar, real-life story.

“[Sanders] ads are resonating so well with Independents that it leads to him doing really well overall,” Bryant said. “Beyond the primaries, that’s where many of the campaigns will be focused,” he added, with candidates targeting swing votes.

More and more Americans have turned away from the Democratic and Republican parties over the last decade, with 42% of Americans identifying as political independents, compared with 33% in 1988, according to a January Gallup poll. If Sanders gets the Democratic nomination, his popularity amongst this demographic could give him an edge in the 2016 election. 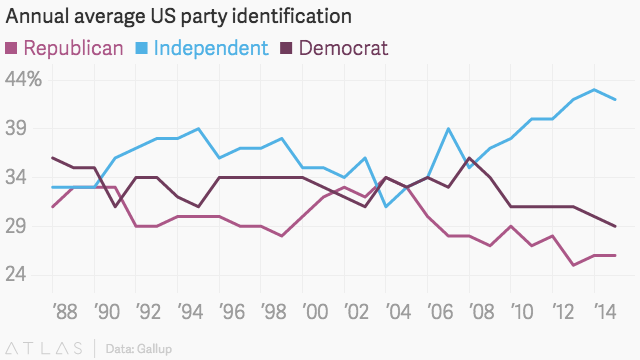 Clinton had a 15-point lead over Sanders in the latest NBC poll, but Sanders has also gained a lot of ground in critical early-voting states like Iowa.

On the Republican side, Ted Cruz was the big advertising winner. His campaign commercial “Rebuild Our Military” was deemed the most-effective among Americans who said they always vote Republican, and two of his other ads came in third and sixth place. Trump’s commercial “Great Again”—the first from his presidential campaign—also performed well. It was ranked the second most-effective ad among those who said they “always vote Republican.”