After GoPro shares had a pretty rough end to 2015, it seems that few people wanted the company’s action cameras this holiday season either. GoPro temporarily halted trading of its shares Wednesday (Jan. 13) as it announced that earnings for the last quarter of 2015 were likely to be lower than expected, and that it would be laying off 7% of its staff. Shares plunged as much as 28% in after-hours trading following the halt.

In the holiday quarter for 2014, GoPro’s revenue was roughly $630 million—this year, things were not quite as rosy. GoPro announced that it expected its revenue for the holiday quarter to be about $435 million, a 31% decline from a year earlier. The company described the results in a release as “lower than anticipated.” 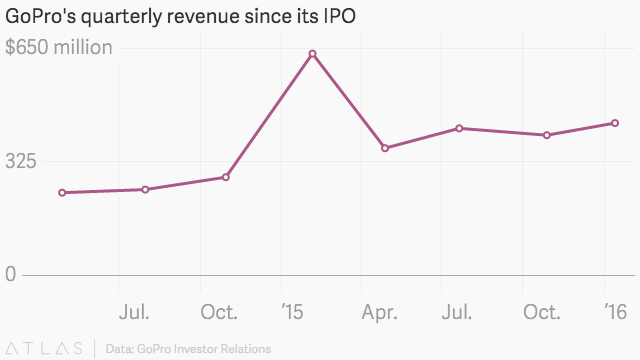 The company said it had over 1,500 employees at the end of 2015, meaning it would be laying off about 105 people. GoPro said the move would help it “better align resources to key growth initiatives,” likely referring to its new areas of focus, such as virtual reality and drones.

GoPro had a large booth at last week’s Consumer Electronics Show in Las Vegas, but it didn’t have any new products on show. The company has been teasing the launch of a quadcopter drone for months, which will be called Karma, but hasn’t released any information on pricing or when it will be released. 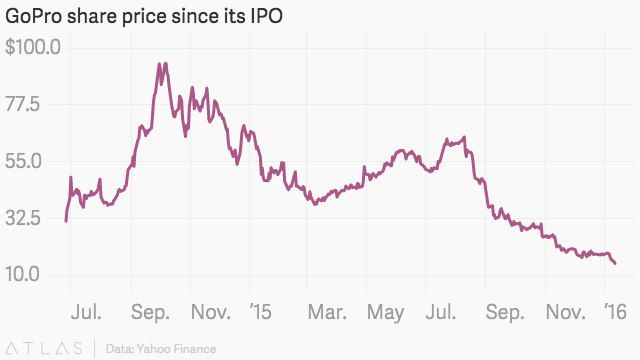 The company’s last new consumer product, the cuboid Hero4 Session, was met with mixed reviews and has had its price cut multiple times since it launched last July. Re/Code obtained an email from CEO Nick Woodman in which he says that the pricing of the Hero4 Session was largely the reason for today’s announcement:

While we clearly made a mistake pricing Session at $399 (more specifically I made the mistake, it was my decision), I’m proud of how we responded. We recognized the problem, price adjusted to $299…recognized that wasn’t enough and price adjusted again to $199 which positioned Session as the best entry-level product we’ve ever made.

GoPro also said Zander Lurie, who had been running the company’s entertainment division, would be stepping down from his role and joining the board of directors. Over roughly the last year, GoPro has penned deals with the NHL and the X-Games, and brought its original content to PlayStation, Xbox, and the Roku player. Lurie’s move leaves GoPro’s desire to become a media company as much as a hardware company in jeopardy.

The company faces a huge question: If everyone that wants an action camera has one, and they’re so durable that owners don’t need to upgrade, what else has GoPro got?