Taiwan will hold its presidential elections this weekend, and Tsai Ing Wen of the Democratic People’s Party (DPP) is widely expected to secure the victory. Her ascension marks a turning point not just for the DPP, but for the island’s politically engaged youth.

Taiwan’s under-40s have embraced political activism over the past four years more than any time in the past decade, and it’s easy to understand why. Taiwan’s GDP growth has remained in the low single-digits during that time, while the average monthly salary for fresh college graduates is about $750, three times lower than Hong Kong. Yet because Taiwan has some of the highest property prices in the world, many of them will never own a home.

The Sunflower Movement of 2014 provided a catalyst for engagement.

After a group of students occupied the legislative yuan (Taiwan’s parliament) to protest a trade pact with China, an island-wide movement blossomed, causing otherwise apolitical Taiwanese to get drawn into political dialogues. A youth subculture of activism emerged, with artists and musicians banding together to support social causes like gay marriage or anti-nuclear power policies.

In some cases, new political parties were formed—most notably the New Power Party, whose Freddy Lim has made headlines as a heavy metal singer turned aspiring politician.

The Sunflower Movement and its supporters harbored resentment towards both the ruling Kuomintang (KMT) party and the DPP. But the DPP has benefited from the movement while the KMT has faltered.

“In the past the youth didn’t clearly favor one party or another to the extent that they do now,” says Nathan Batto, assistant research fellow at National Cheng Chi University. “This generation of young people has been very politicized” by the protests of the last four years. With those protests has come a “very negative attitude” towards the China-allied KMT.

Since 2014, DPP has continuously sought engagement with young activists, while the KMT has dismissed them. At a rally for Lim in December, Tsai made an appearance on stage to shake the singer’s hand. And for the legislative elections in Taipei and Taichung, the DPP has formed coalitions with the new parties.

This activism has already made an impact in the polls—turnout rates for people aged 20 to 40 increased by about 10% during last year’s district elections, during which the DPP took dominance from the KMT in seven municipalities. Taiwan, like China, is a greying society, where over-65s are expected to top 20% of its citizenry by 2025. But young people still make up about half of its population.

Young Taiwanese don’t identify with KMT. Borne out of the civil war with Mao Zedong’s Chinese Communist Party in the 1940s, the KMT continues to define itself and Taiwan’s population as “Chinese,” and unification with the mainland remains a key issue. But Taiwan residents increasingly see unification as peripheral to their lives, and themselves as Taiwanese, not Chinese. 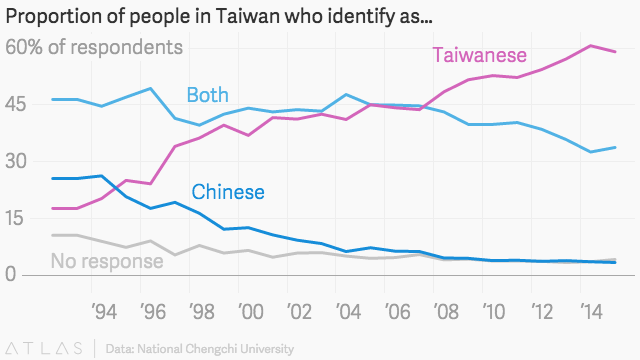 Youth voters have other issues with the KMT. “Its policies toward Taiwan are not good; it stands on the side of corporations and capitalists,” a college-aged voter told the BBC after last year’s district elections.

The KMT, meanwhile, seems stuck in time. One candidate called Lim “psychologically abnormal” (link in Chinese) because his hair is “longer than a woman’s,” and was roundly mocked online for being out of touch.

It is clear the KMT must re-invent itself, but not clear what that might entail. “There are two big questions facing this election,” says Batto. “The first is, ‘What will Tsai do when she is inevitably elected?’ The second is, ‘What on earth will happen to the KMT?’”