Last Thursday (Jan. 14), the Shanghai Stock Exchange briefly fell below even the lowest point of last year’s rout. And yet by the day’s close, it was up by a neat 2%.

It is unlikely that such a miraculous turnaround came from a change in investor sentiment. More likely is the possibility that the government stepped in to force regulators and major funds to buy stocks and prop up the market, as it did last year.

But subsequent falls in the stock market have proven that the government is either unable or unwilling to provide an artificial floor for share prices. And that raises the question: How far could China’s stocks fall?

In a normal market, an answer could be sketched out by assessing the extent to which stocks are overvalued, and there are a couple of ways to do that. But it is worth noting that China’s stock markets don’t appear to have any link to real-world economics, making an attempt to guess their potential movements essentially an academic exercise.

Take a relatively free economy like the US. There, a benchmark stock index rises and falls roughly in line with GDP growth, give or take the odd boom and bust: 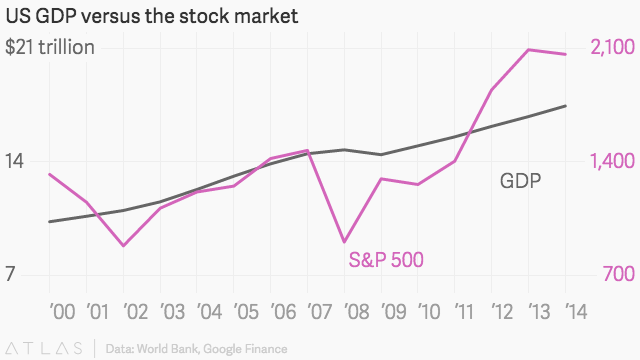 In China, neither of the country’s two main stock markets seem to follow GDP in any sense: 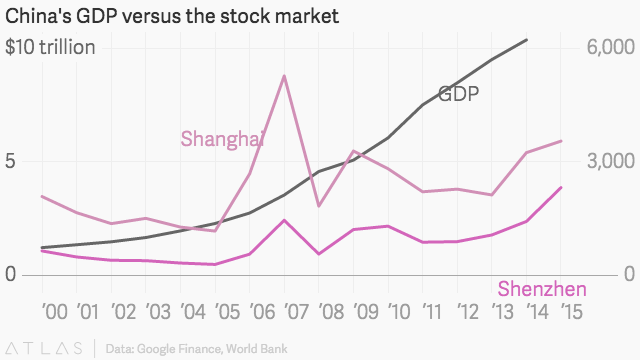 There are multiple reasons for this, including the fact that a far smaller proportion of the Chinese population play the stock market compared to in the US.

To zoom in though, it’s worth looking at Chinese markets’ price-to-earnings (PE) ratio, which compares the price of a company’s stock to its annual earnings per share. Strictly speaking, there is no good or bad number, but a figure higher than 20 means that a company’s share price is more than 20 times its annual earnings-per-share. That’s generally considered to be on the high side, and would suggest that the company’s shares are overvalued.

The fact that the average PE ratio among companies on the Shenzhen stock exchange is over 40 then, should be a huge red flag:

If we imagine that a PE ratio of 20 is the upper limit that most investors would be happy to accept, then it’s reasonable to assume that the price of stocks listed in Shenzhen need to fall by half, before investors regain confidence in their value. And until that huge number starts approaching 20, we ought not to be too concerned about selloffs on the Shenzhen stock exchange (again, in theory).

Unfortunately that doesn’t explain investors’ eagerness to ditch stocks listed in Shanghai, which has maintained a PE ratio that has looked basically OK for years: 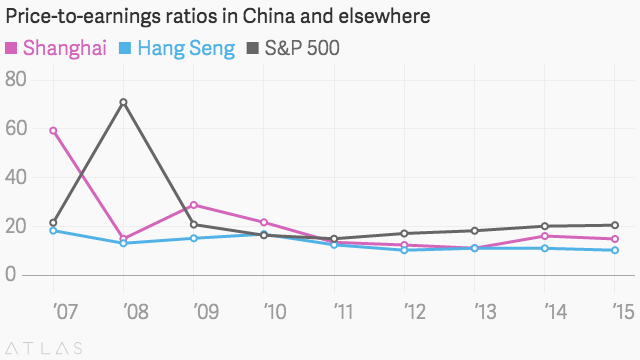 So if China’s markets don’t follow wider economic growth (via GDP) and investors act independently of things like PE ratios, then is there anything we can use to judge how far the market might fall?

Ironically, government intervention might be one tool. During last year’s rout, the government threw everything it had at the markets to try to stop them from tanking, only to find out that investors kept selling. In the beginning of this year authorities implemented a “circuit breaker” to prevent markets from falling too fast on any single day; that too encouraged investors to sell faster.

Perhaps the only law worth noting in China’s markets is that, once the government publicizes a strategy to prevent a free-fall, that’s precisely when stocks will begin tanking quickly.