More than 30,000 organ transplants occurred in the US in 2015, an increase of approximately 5% compared to 2014, and a record high, according to the United Organ Sharing Network (UNOS). The number of transplants was made possible by a record number of individual organ donors: more than 15,000, the majority of whom were deceased and thus able to donate multiple organs.

This is the third year that UNOS has seen record numbers of organ donations, which have been steadily increasing over the past 25 years. 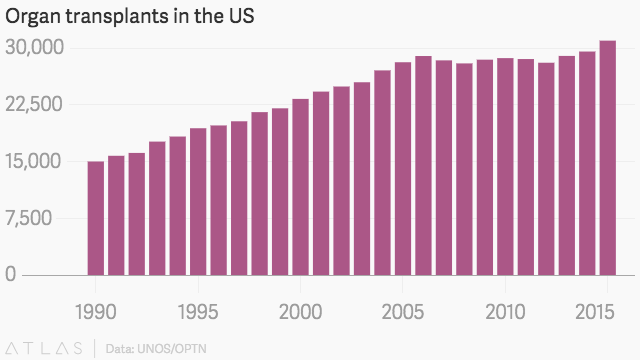 Approximately 120 million Americans are registered organ donors, meaning they have consented to the transplantation of their organs, eyes, and tissues after they die.

Up to eight sick people can benefit from the tissue and organs of a single donor, according to UNOS/OPTN, and even though the number of transplants performed each year is growing, the number of people who need transplants has grown faster. 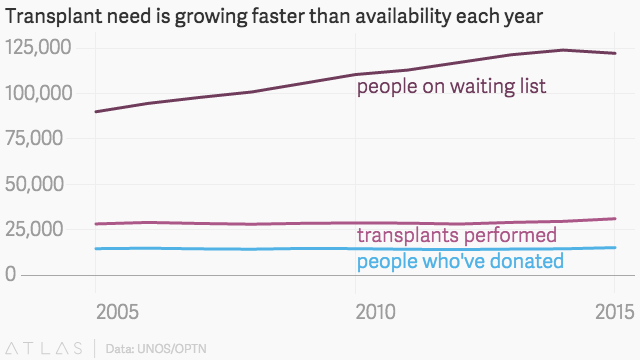 There are currently 121,634 people on the US waiting list for organ donations, according to data from UNOS, which is contracted by the federal government to serve as the official Organ Procurement and Transplantation Network (OPTN) for the US. In a press release yesterday (Jan 13),Brian Shepard, the organization’s CEO, said “opportunities remain for us to use more of the organs currently donated, even as we hope for more people to choose to save lives through donation.”