When China’s paramount leader Deng Xiaoping opened up the economy in the late 1970s, he famously said “Let some people get rich first.” Three decades later, his immortal words are proving more true than he likely ever expected, as income and wealth inequality worsen in the country.

One-third of China’s wealth is owned by the top 1% of households, while the bottom 25% account for only 1% of the wealth, according to a new report this week from Peking University. The China Family Panel Studies, launched in 2010, covers 14,960 households in 160 regions of 25 provinces nationwide, and focuses on the “well-being of the Chinese population.”

As jarring China’s 2015 results may sound, China’s inequality is still not as bad as the global average. According to Credit Suisse’s 2015 Global Wealth Report, the richest 1% of the world now control over half of its total wealth, while over 70% of the global adult population have less than $10,000.

The report, as China’s state media points out, says the country’s Gini coefficient has increased from 0.3 in the early 1980s to 0.45 last year, but it is down from 0.49 in 2012. The index, a widely used measure of inequality, ranges from 0 to 1, with 0 representing the most equal society. A coefficient of 0.4 is often considered a warning level.

A deeper look at the country’s official inequality data for the past decade also suggests inequality has been improving in China after the 2008 financial crisis—and recently is less of a problem than in the US, according to US Census figures. 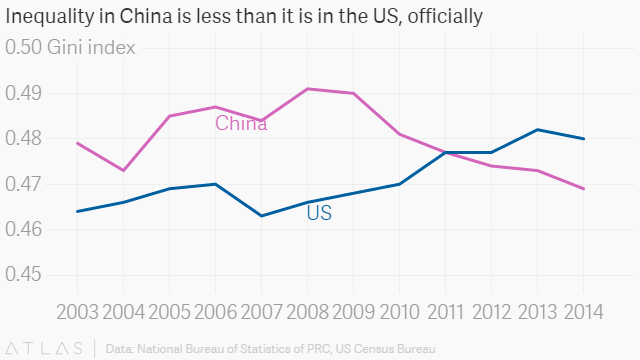 This data may be somewhat misleading. A 2014 study from the University of Michigan, which examined Peking University’s study that year, found China’s Gini coefficient was actually 0.55, versus the official Gini coefficient released by National Bureau of Statistics of 0.469. This led to suspicions China was whitewashing its official economic data, which is not an uncommon trick. Still, given today’s Peking University figure of 0.45 for 2015, things look to be moving in the right direction.