How we shape, experience, and define the workplace.

There’s an abundance of job seekers around the globe right now, eager to land steady employment. Yet job vacancies in dozens of countries are also plentiful: In the US, for instance, there were 5.4 million open jobs in 2015—the highest in 15 years. Other countries like Germany and Canada are also experiencing high unfilled-job rates. 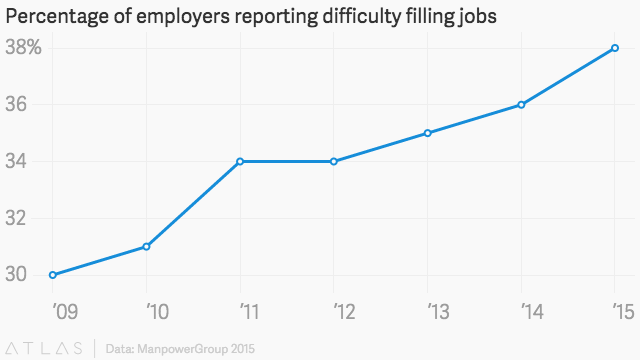 High vacancy rates can be a sign of a healthy economy—as a country grows, it begins to have more jobs to offer—and, of course, it takes time for jobs to be filled. But according to an analysis released today (Jan. 19) by global job search engine Indeed.com, companies’ across-the-board hiring difficulties also indicate the existence of a clear mismatch between employers and job seekers. Indeed’s report attributes this mismatch to several factors, including lack of qualified applicants; overabundance of some positions and undersupply of others; and uneven employer demand for certain talents, especially technology-related ones.

The increasing mismatch is leading many employers to recruit workers from abroad, where there’s a much broader pool of talent available. That, however, poses a problem for many countries—specifically, the ones that end up seeing a greater number of workers leaving  than entering.

“Across the labor market, there are lots of people trying to hire the same people,” Tara Sinclair, Indeed’s chief economist and an economics and international affairs professor at George Washington University, tells Quartz. This type of clustered recruitment leads to a “brain drain,” or a decrease in a country’s supply of talent, which can stunt its growth and prosperity.

Some countries have more to be concerned about than others. Indeed calculated a “net interest score” for each of the 55 countries in which it operates, examining interest from job seekers inside and outside of a country as share of all incoming/outgoing job searches. It found that the US and several European countries attract more workers than they lose—but China, Israel, and Sweden are among those that lose more than they attract.

Greece, Pakistan, and Norway are ones that demonstrate the most risk of losing talented workers. Russia, Brazil, and the United Arab Emirates have the best ratio of coming-to-leaving workers. While you might think people would be eager to leave struggling economies like Russia and Brazil, Indeed said, in reality, “poor economic conditions give little incentive for workers in Russia and Brazil to search for jobs in neighboring countries—which matters because much of international migration still involves workers moving to nearby countries to find work.” 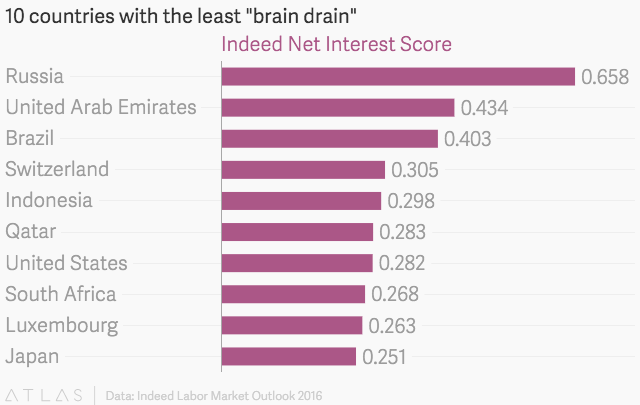 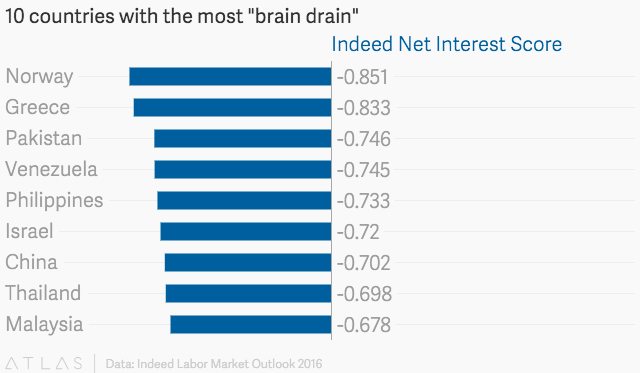 Migration isn’t the only thing shaking up the global labor market right now. Wage inequality, education, and new forms of work like the gig economy and part-time arrangements all play a role. Yet for countries looking to flourish, holding tightly onto valuable workers should probably be a top priority.