So much wealth has accumulated among the world’s richest that the 62 wealthiest people on the planet now own more than the poorest 3.6 billion people, or half the planet, according to research published by Oxfam, an anti-poverty charity.

“Far from trickling down, income and wealth are instead being sucked upwards at an alarming rate,” Oxfam said in the report, “An Economy For The 1%“ (pdf). “Once there, an ever more elaborate system of tax havens and an industry of wealth managers ensure that it stays there, far from the reach of ordinary citizens and their governments.” 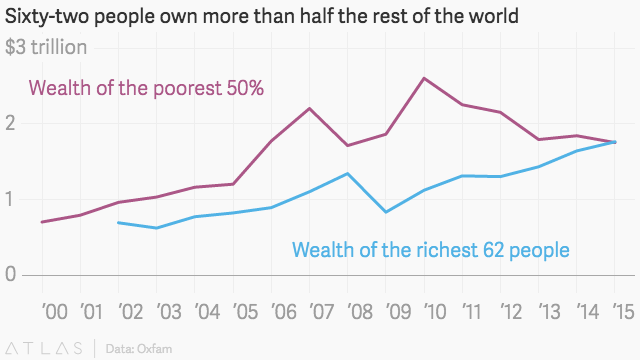 The charity released the report one day ahead of the start of the World Economic Forum at Davos, where some of the world’s richest and most powerful business leaders and government decision-makers will meet.

Oxfam argued that wealth inequality isn’t just a problem for those on the bottom but that it poses a threat to economic development for everyone. The number of people lifted out of absolute poverty over the past two decades has been encouraging, says the report, but had inequality not risen at the same time, as many as 200 million more people could have been lifted out of poverty over the same period. “That could have risen to 700 million had poor people benefited more than the rich from economic growth,” said the report.