One of the world’s largest food manufacturers is feeling more optimistic that it can counteract a global downturn in demand for the creamy spread.

Unilever reported its Hellmann’s brand grew by 7% in 2015, attributing the growth to its decision to source only cage-free eggs and a newly-designed squeeze bottle that’s supposed to reduce mayo waste. The company has said that—at least in the US—consumers typically miss about 1,000 pounds of mayonnaise each year because it gets stuck in hard-to-reach spots in its containers.

(The fact that the new package amounts to a roughly 30% price increase per ounce—comparing current prices of a 30-ounce jar of Hellmann’s with a 20-ounce squeeze bottle—didn’t hurt the performance of Unilever’s mayo either.)

The positive news comes as Unilever continues to trudge through what’s been a multi-year downturn for mayonnaise sales. In 2014, retail sales of mayonnaise were down 1.5% in the US and more than 9% globally, according to market research firm Euromonitor. 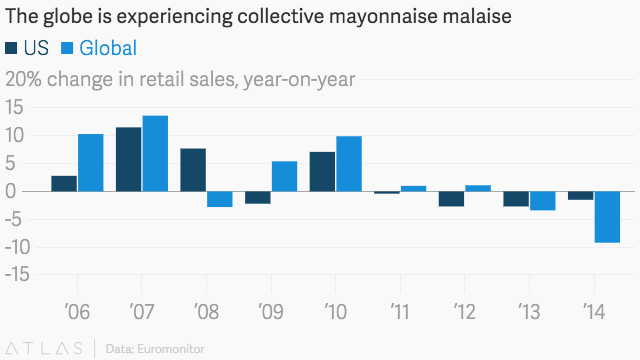 In a recent earnings call with investors, Unliver CEO Paul Polman said Hellmann’s growth in 2015 came in spite of increased pressure from competition, including from mayonnaise-industry disruptor, Hampton Creek. In December 2015, Unilever went head-to-head with Hampton Creek before the US Food and Drug Administration over whether its eggless mayonnaise product could be marketed as “mayo.” Hampton Creek wound up walking away victorious from that fight.