Amazon is gearing up to expand its European footprint, taking several services deeper into the continent, including one that’s already seen success in the UK: online grocery shopping and delivery.

Food retail remains one of the most under-represented parts of the online retail sector, but there are signs it could work. Analysts have estimated that more global consumers will give online shopping a shot in 2016 than they did in 2015.

That’s good news for the Seattle-based e-commerce company, which has been steadily picking up revenue at home and abroad. Data show North America and Western Europe are the company’s two major strongholds in the world, regions where it has consistently snapped up market share year-over-year. 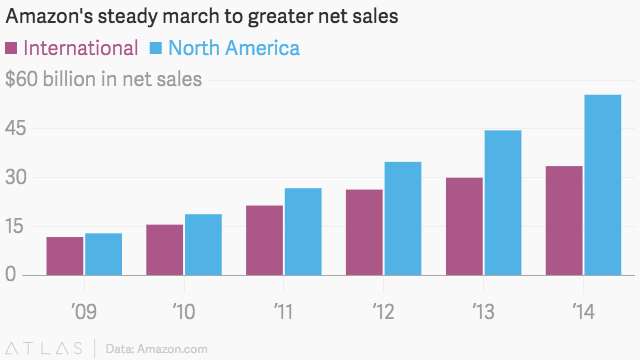 Amazon said in a statement that it currently employs about 40,000 people across Europe, and plans to add several thousand more to its ranks in 2016. The Financial Times reports grocery delivery will be part (paywall) of the strategy. In Western Europe, the company’s own sales growth rate has kept pace—consistently exceeding even—the online sales rate across the region. It’s a positive trend for a company looking to expand services. 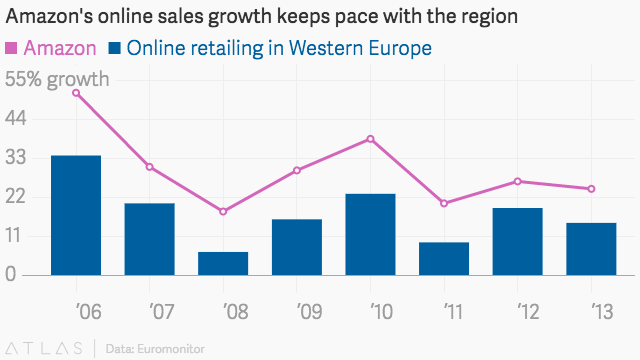 “When I look at Amazon, you’ve got a very sophisticated grocery market in the UK, that I would argue is more advanced than it is in the US,” said Charlie O’Shea, an analyst at Moody’s to Quartz. “We would expect the UK model to be more the model when expanding the grocery delivery business to larger continental cities.”

The company is also expected to make its Prime service a centerpiece of the expansion strategy, focusing on marketing a selection of shows—including the popular Transparent series and its venture with Woody Allen—as well as delivery perks.

One area in which the company needs to be mindful, though, remains pacing. Don’t move too fast, O’Shea warned.

“There are certain things you have to tweak in foreign markets, but you try to stick with the playbook,” O’Shea said. “In Amazon’s case it’s been very balanced and measured expansion…and that’s the secret sauce for Amazon.”