In December, the US Federal Aviation Administration mandated that anyone owning a consumer drone weighing more than half a pound would have to pay $5 to register in a government database. But even though Americans were expected to purchase between 700,000 and 1 million drones during the Christmas season, the FAA said today (Jan. 22) that only 295,306 owners have used its new portal to register drones since it went live Dec. 21, 2015.

To encourage drone owners to register, the FAA had been running a deal where anyone who registered between Dec. 21 and yesterday, would have their $5 fee reimbursed by the government. It seems that wasn’t enough of an incentive for most people who got drones this Christmas, if sales estimates were accurate. That being said, the agency is only requiring drone owners to register themselves—any person can have any number of drones, they just need to be in the FAA’s system once—so it’s possible that everyone actually got two or three drones for Christmas and they all did as they were asked. 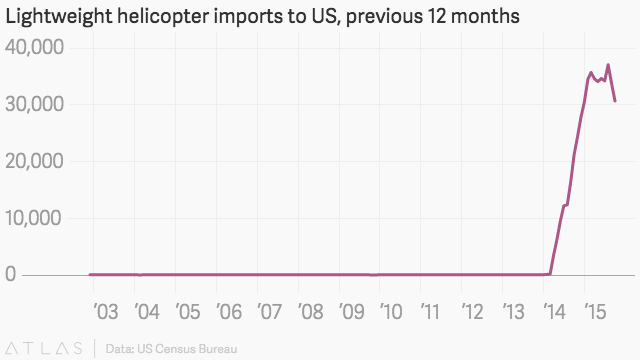 That, however, wouldn’t account for the drones sold in the US prior to this Christmas. And while there are no solid answers as to how many have been sold, Quartz recently analyzed US Census Bureau data and found that the number of small helicopter imports—which includes drones—has skyrocketed in recent months. Some of the bigger names in drone manufacturing, including DJI, Ehang, Syma, Hubsan, Yuneec, Parrot, and Hexo, are all either from China or France.

According to the FAA’s FAQ page, there’s quite a steep penalty for failing to register a drone:

Failure to register an aircraft may result in regulatory and criminal sanctions. The FAA may assess civil penalties up to $27,500. Criminal penalties include fines of up to $250,000 and/or imprisonment for up to three years.

The agency told Quartz that drone owners have until Feb. 19 to register, so it hasn’t yet issued any fines, and stressed the process is simple. If people don’t register by then, however, the FAA may start handing out penalties. The agency didn’t immediately respond to a follow-up question on how it plans to do that.