Royal Bank of Scotland is at it again.

The beleaguered British bank, still majority owned by the government seven years after its bailout, dropped a welter of new litigation charges and writedowns on shareholders in an unscheduled announcement today (Jan. 27).

The bank will put aside £2 billion ($2.9 billion) in provisions to cover looming civil suits over toxic mortgage-backed securities in the US and compensation for customers tricked into buying ineffective insurance in the UK. On top of that, it will also write down the value of its private banking business by some £500 million and sink an extra £1.6 billion to plug a deficit in its pension fund.

These charges will almost certainly push the bank to yet another annual loss, its eighth in a row, when it reports full-year 2015 results next month:

Needless to say, investors aren’t pleased. RBS’s shares have lost about a third of their value over the past year, and are falling again today: 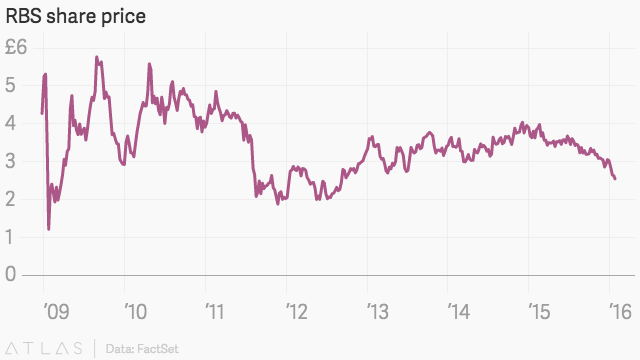 When the nearly bankrupt bank was bailed out back in 2008 and 2009, the government amassed a majority stake at an average price of around £5 per share. Amid endless restructuring and ballooning litigation charges, the bank’s shares haven’t traded anywhere near break-even for years. Fed up with waiting for the flat-footed finance firm to pick itself off the floor, last year the government started selling down its stake at a loss. Given RBS’s missteps since then, it looks rather shrewd in retrospect.

Ross McEwan, who took over as CEO of RBS in late 2013, pledged today to move “further and faster” to clean up the bank, a mantra that he and other execs have used for the past year or so.

McEwan also said he was “determined to put the issues of the past behind us.” We’ve heard variations of this from the CEO before, as the accident-prone bank stumbles on.