Membership in America’s corporate elite comes with not just a hefty compensation package but an abundance of perks.

In the 2014 fiscal year, these “executive perquisites” ranged from standard travel allowances to club dues, according to a new report from research firm Equilar. While the report doesn’t get into any truly exotic CEO benefits—like the $451,574 lease of a Las Vegas villa that Wynn Resorts’ Stephen Wynn disclosed in 2012—it does give a good picture of what your typical US CEO enjoys in additional compensation.

For starters, free travel—in the air and on the ground. Nearly 40% of S&P 500 CEOs reported aircraft and auto benefits in 2014, according to Equilar’s analysis. The percentage was slightly higher for auto (maybe they’re taking Uber?), but, not surprisingly, the dollar value of an aircraft perk was much, much greater. 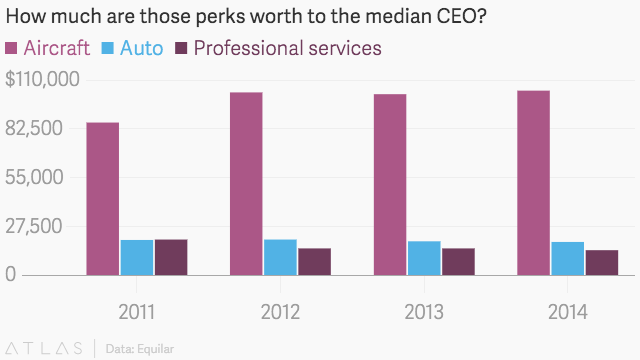 The other big benefit common among S&P 500 CEOs, as you can see above, is professional services, which includes financial counseling, tax planning and preparation, and estate planning. Those are worth about as much as auto perks, per Equilar’s analysis. Tally the three categories up, and the median CEO received about $137,000 worth of the most common executive benefits in 2014, up slightly from $136,000 in 2013.

That’s just the median, though. According to Equilar, the top disclosed value for an aircraft perk in 2014 was $1 million.