Amazon Web Services generated $2.4 billion in revenue during the fourth quarter, the company reported today (Jan. 28), in line with analyst expectations. It generated almost $8 billion in sales over the full year of 2015. 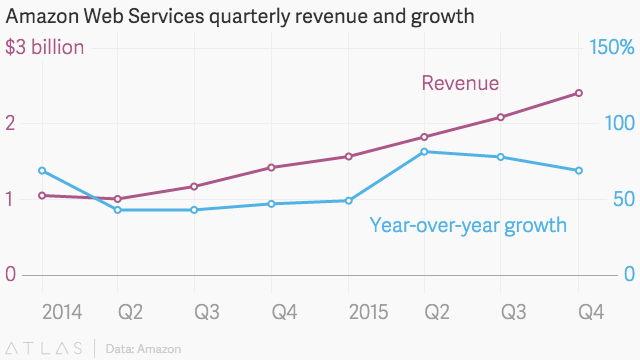 AWS fourth-quarter revenue grew 69% year-over-year, a deceleration from 78% growth in the third quarter and 82% in the second quarter.

The AWS division generated $687 million in operating income during the quarter, and almost $1.9 billion over the full year. It represented about 40% of Amazon’s fourth-quarter consolidated-segment operating income, despite only generating 7% of the company’s sales.

Another way of looking at it: AWS generated about two-thirds as much operating income during the fourth quarter ($687 million) as Amazon’s entire North America e-commerce business ($1 billion).

Amazon shares are down 14% in after-hours trading on the company’s broader results.