Japan’s central bank is determined to keep the nation from sliding back into stagnation and deflation. Analysts knew this. What most of them didn’t expect was the bank’s decision today (Jan. 29) to move a key benchmark interest rate into negative territory for the first time ever (paywall). Just last month, bank governor Haruhiko Kuroda rejected the idea of negative rates. 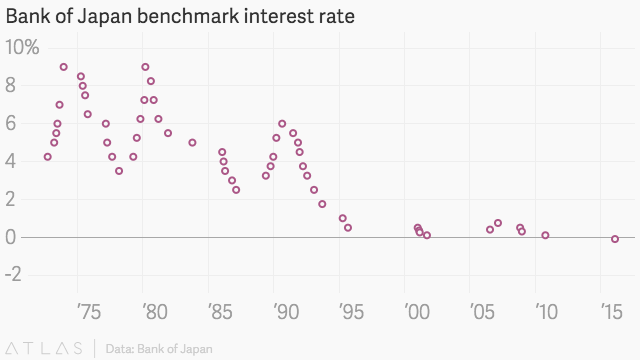 The yen began tumbling before the decision was officially announced, thanks to rumors and early reporting in the Nikkei. The dollar jumped as much as 2.2% against the yen; at 5pm Tokyo time it was at ¥120.71, up 1.6%.

As expected, the bank said it would continue expanding its asset base at a rate of 80 trillion yen ($673 billion) a year through buying up Japanese government bonds, stakes in real estate trusts, and electronically traded funds. But of the 42 economists surveyed by Bloomberg ahead of the call, only six predicted that Kuroda’s board would expand the already-record stimulus.

Japan is not the first major central bank to make the bold move to less than zero. The European Central Bank reduced its benchmark interest rate to -0.1% in June 2015. In effect, it began charging commercial banks to hold their excess deposits at the central bank, the idea being to encourage them to lend to companies and jumpstart the economy.

The Bank of Japan is thinking along the same lines. Its surprise move today could pressure the US Federal Reserve to not raise interest rates in March, as it did last month for the first time since the global financial crisis began.