When markets closed in the US on Jan. 29, just $13 billion separated Alphabet from Apple, the world’s most valuable company. 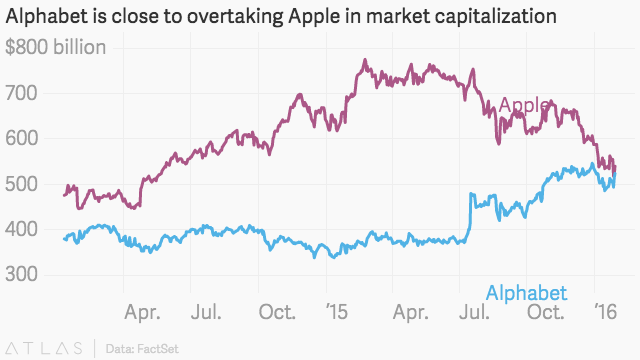 When Quartz first noted that Alphabet was within arm’s reach of surpassing Apple’s market value, the Mountain View, California company was still lagging by $47 billion. Then, we said the scenario that would propel Alphabet to the top hinged on an earnings disappointment from Apple and better-than-expected results from Alphabet.

Well, Apple reported slightly slower revenue growth for its holiday quarter and provided a weak sales forecast for the current quarter, both below analyst consensus. Its stock hasn’t suffered tremendously, but since releasing its results, it was down 3% as of the close of Jan. 29.

So now it’s Alphabet’s move. Its stock has been incrementally climbing in recent days leading up to earnings, which it reports tomorrow (Feb. 1) and analysts overall are optimistic about, projecting a 17% increase in sales year over year, according to FactSet. And as Google has demonstrated in the past, a stellar earnings report can add tens of billions of dollars of value in a single day.