Twenty one executives from China’s largest peer-to-peer money lending platform have been arrested, on suspicion of fleecing investors of 50 billion yuan ($7.6 billion).

Police allege that the senior management of Ezubao stole that much from 900,000 investors nationwide, which would make it China’s largest-ever case of investor fraud, by both cash value and the number of victims. By number of victims, it would be the largest Ponzi scheme in the world.

At least two suspects have already confessed in police detention centers, according to a report by Xinhua (link in Chinese), China’s state-run news wire. Zhang Min, the former president of Yucheng Group, the lending scheme’s parent company, reportedly described the business as “a complete Ponzi scheme.”

Investor fraud has become a huge problem in China, where low bank deposit rates, shaky housing prices and a weak stock market have prompted citizens to look for alternate places to put their cash. Last year, financial scams raked in more than $24 billion in China, as Quartz reported earlier.

Many of these scams involved peer-to-peer lending, in which individual investors are matched with people who need cash for a project, business, or to pay down more expensive debt. Companies in the sector act as matchmakers, and often claim their fees are lower than traditional banks.

Ezubao promised annual returns of between 9% and 14.6%. But as many as 95% of the projects listed on the company’s website (now inaccessible) were made up, according to a confession from Yong Lei, the company’s risk controller, Xinhua said. Instead, the company used new cash to repay old customers.

In December, police opened an investigation into the company and froze its assets. Lenders, unable to get their cash back, protested outside Ezubao’s offices:

Authorities believe that Ezubao raised a total of 70 billion yuan since its launch in June 2014, the vast majority of which was misappropriated. According to one economic newspaper (link in Chinese) Ding Ning, Yucheng’s chairman, spent over 1 billion yuan on gifts, many of which—including a 12-million yuan diamond ring and 550 million yuan in cash—went to Zhang Min. Ding also allegedly paid his brother 1 million yuan per month ($1.8 million per year). 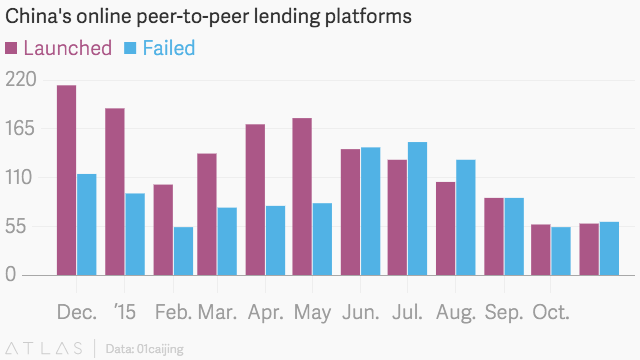