More money flowed out of China last year than in any year before, though it is hard to say exactly how much. Estimates vary from more than $500 billion to $1 trillion. In 2014, just $134.3 billion left China.

The rise in China’s capital outflow is being interpreted as a symptom of the slowing economy generally, and the nervousness investors feel over the value of the yuan in particular. ”The immediate trigger for a pickup in capital outflows toward the end of the year was the People’s Bank of China’s poor communication over its shift in currency policy,” Mark Williams, chief Asia economist for Capital Economics, told Bloomberg.

But it is important to remember that not all money that left China last year was reacting to bad news. Chinese companies doing deals overseas, Chinese students studying abroad, and shoppers purchasing foreign goods all contributed to the amount of cash that crossed China’s border.

According to Dealogic data, the 10 (mostly state-owned) Chinese companies that spent the most money buying foreign businesses last year did $46.6 billion in deals, representing between 5 and 10% of the capital that left China’s borders (depending on what that total actually is). 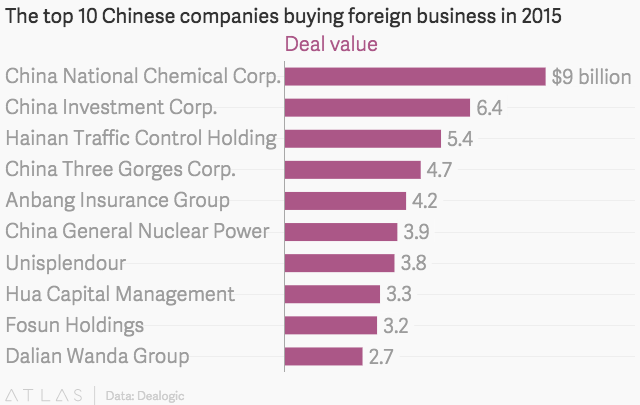 Last year saw a rise in popularity of the mega-merger globally, and some of China’s outbound deals were so large (CNCC’s $9 billion purchase of Pirelli for instance, or Unisplendour’s $3.8-billion deal for a stake in Western Digital) that a single deal was enough to put the buyer in the top 10 list of big spenders for the year: 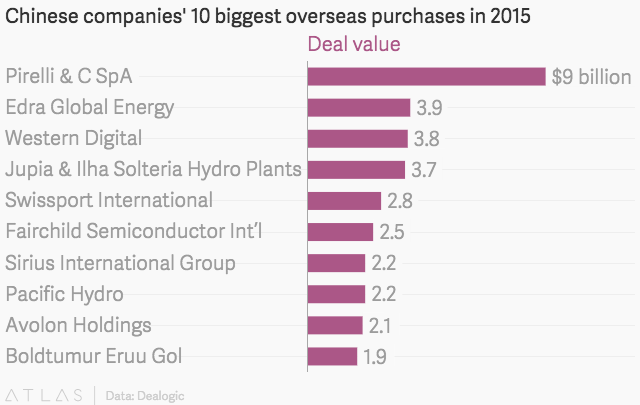 Chinese companies targeted heavy industry and particularly oil and gas companies, as well as nearly every industry in Europe in 2015. While these deals took capital out of China, they also promise to bring more profits in for their parent companies, and may provide a counterbalance if China’s slowdown is actually a hard landing.