Google’s parent company, Alphabet, is now bigger than Apple—and every other publicly traded company on Earth.

Alphabet’s just-reported earnings sent the search giant’s shares surging in after-hours trading. With Alphabet’s Class A shares trading at more than $810 each after the close, the company’s market value appears to be somewhere in the general ballpark of $560 billion, that’s more than enough to overtake Apple’s nearly $535 billion market value, according to FactSet. 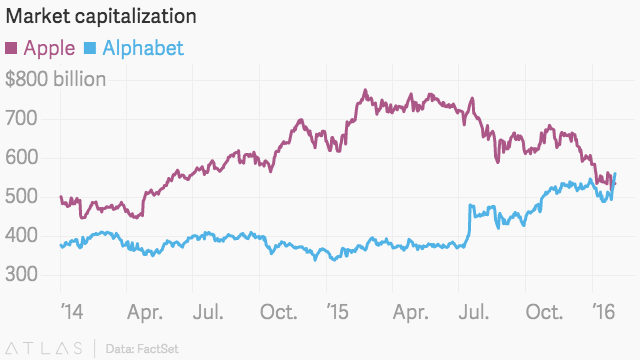 The two companies have been nearing this moment for months, after long stretch where Apple’s value towered over that of Google. 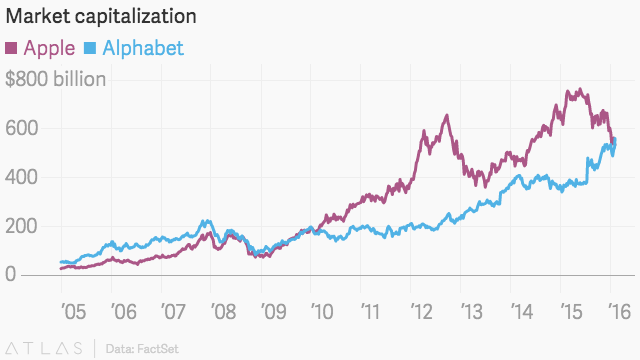 Alphabet has seen its fortunes rise on the back of massive growth in its core advertising business, even as it continually draws attention for its projects in everything from self-driving cars to artificial intelligence. It reported as Alphabet, and not Google, for the first time ever today, part of a restructuring that started in August of last year.

Apple, on the other hand, has seen its fortunes reverse, as the handset market matures in developed markets and the emerging markets that Apple was looking to for growth are facing economic headwinds. Sure, it has a pretty cool music service, plans for electric cars and some wireless chargers in the works. But that hasn’t been enough to keep alive the investor enthusiasm that propelled it past Exxon Mobil to become the world’s largest company back in 2011.