The top dog in the Iowa caucuses didn’t actually win—or even take second. However, Florida senator Marco Rubio came out of nowhere to claim 23.1% of the vote, just shy of Donald Trump’s 24.3%. He’d been expected to nab third place, but until a few days ago, he’d been polling no higher than 13.7% in Iowa, according to Real Clear Politics’ average. 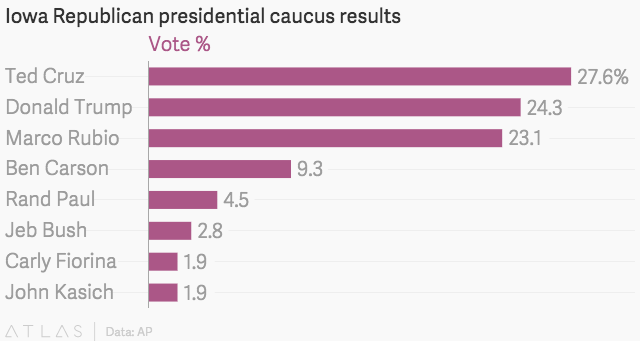 Rubio’s freak surge must have brought with it a wave of relief for the Republican Party grand poobahs. This is, after all, a party in the throes of existential despair. Trump’s insurgency has flouted the party’s core principles—and its authority—with glee. And the sudden groundswell of Iowan support for Texas senator Ted Cruz was hardly a welcome alternative. (Bob Dole, a former GOP house speaker and the a party’s elder statesman, called Cruz an “extremist” and warned of ”cataclysmic” losses if he won the nomination.)

Rubio, by comparison, is “one of the potential mainstream candidates,” says Charlie Black, a veteran Republican campaign strategist who was senior adviser for John McCain’s presidential campaigns. The others include John Kasich, Jeb Bush, and Chris Christie.

The Florida senator’s surprise rise offers hope that someone from the GOP mainstream might stop Trump or Cruz from letting the populist, anti-establishment tempest they’ve whipped up lead to the cataclysm Dole foretold.

The funny thing, though, is what counts as mainstream these days. As Harry Enten at FiveThirtyEight notes, Rubio’s not that much less ”anti-establishment” or conservative than Cruz, who occupies the extreme ends of both spectrums.

In 2010, Rubio won his senate seat on a wave of Tea Party support, defying party leaders by running against their chosen candidate. He boasts that his presidential run represents similar defiance of the establishment’s wishes. Those bona fides are good enough for Rush Limbaugh, the influential conservative talk radio host, who dubs Rubio “anti-establishment” along with Cruz and Trump. As for his conservatism, Rubio, Cruz and Ben Carson are among the only leading candidates who want to ban abortion even in cases involving rape or incest. He’s also on the party’s outer fringe in denying man-made climate change.

“The interesting thing is that if someone told Rubio four years ago you’re going to be the establishment candidate running for president with a bunch of guys running to your right, he’d have said, ‘You’re crazy,'” says Black.

“[However] he does believe in the rules and he plays by the rules—unlike Cruz, who basically came to the senate to use it as a prop to run for president and shut down government.”

So what makes the mainstream Republicans suddenly accepting of Rubio? It might have to do with the somewhat presidential figure Rubio cuts compared with Cruz and Trump. At least, it’s something Iowa caucus voters seemed to pick up on; in last night’s entrance polls, Rubio was the choice for 43% of voters concerned about presidential electability.

“What you’ve got is a whole group of people who are conservatives and who mostly agree on issues… [except] maybe immigration,” says Black. “Therefore, whoever comes out of it looking like they can win is going to get support from people who aren’t evangelicals or hardline Tea Party.”

It’s unclear if this phenomenon will help Rubio execute his campaign’s “3-2-1” plan (meaning, placing third in Iowa, second in New Hampshire, and first in South Carolina). Heading into the New Hampshire primary on Feb. 9, Trump leads by a wide margin; Rubio is polling roughly even with Cruz and more moderate candidates, Kasich and Bush. Though he just won an endorsement from Tim Scott—a popular, conservative South Carolina senator—Rubio’s New Hampshire showing will decide much about his chances for staving off that GOP cataclysm.