GoPro’s financial history since going public in 2014 has so far proven to be as extreme as the activities people film with the company’s cameras.

Last month, GoPro temporarily halted trading of its shares to announce that this past quarter’s earnings were likely to be lower than expected. And the company delivered on that warning. It said in January that its 2015 holiday quarter’s revenue would likely be about $435 million—roughly $200 million less than the same quarter in 2014—and today, it announced it actually brought in $436 million.

“In 2015, we recorded 16% year-over-year revenue growth and the fourth quarter represented the second highest revenue quarter in the company’s history,” CEO Nick Woodman said in a release. ”However, growth slowed in the second half of the year and we recognize the need to develop software solutions that make it easier for our customers to offload, access and edit their GoPro content.” 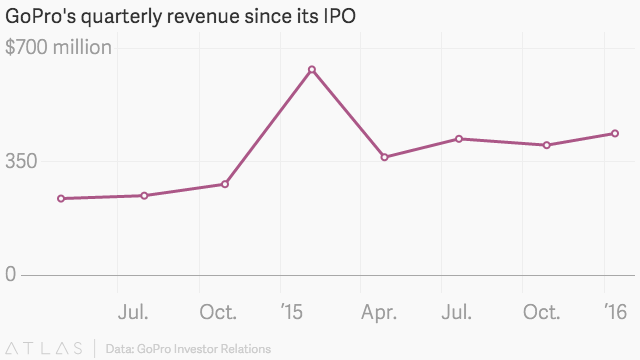 The company hasn’t released a new product since its middling Hero4 Session camera last summer, which has seen its price slashed multiple times over the year. That being said, GoPro announced today that it sold 6.6 million cameras over the last quarter—about 27% more than it did the same quarter a year earlier—but it didn’t break out how many of those sales were its newest camera. In addition, it announced that it would stop selling its cheapest camera.

Prior to the earnings announcement, the company’s shares were trading about 60% below their IPO price. The latest results sent them plummeting further. 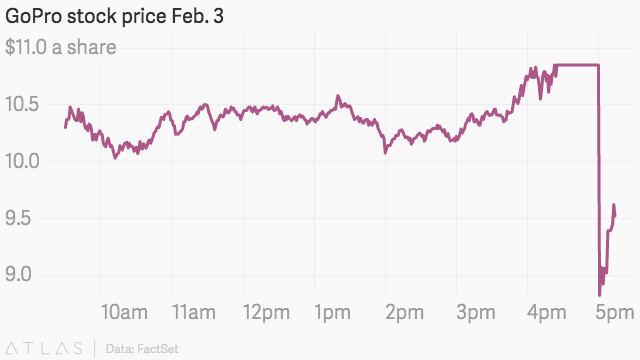 Today’s earnings confirm the fear that it’s starting to look like the company that brought the action camera to the mainstream doesn’t have much else up its sleeve. It seems like everyone that wants an action camera already has one.

With its stock under attack, GoPro announced that it will stop offering quarterly guidance going forward, and that it will be replacing its CFO. Jack Lazar, who’s managed the company’s books for the last two years, is retiring, and will be replaced by Brian McGee, previously a business director at Qualcomm.

The company announced in January that it was laying off about 105 people to help it “better align resources to key growth initiatives.” GoPro has been teasing new areas of growth throughout the last year. It’s going to release a quadcopter drone, called Karma, sometime soon—at a time when the US drone market seems to be hitting the mainstream. (It even released some new 4K footage shot by Karma while it kept the world waiting for its earnings.) GoPro is also working on a 16-camera VR video system called Odyssey, right as VR headsets like Facebook’s Oculus Rift and HTC’s Vive are starting to go on sale.

Whether those areas, or another rectangular camera, will be what the company needs to rebound, remains to be seen.